Only minutes from downtown Tucson and dotted with towering, spiky cacti as far as the eye can see, Saguaro National Park can only be described as “otherworldly” — especially when you visit and learn that these massive, water-hoarding plants can stand up to 40 feet tall! Initially designated a National Monument back in 1933, this landscape was named a national park relatively recently in 1994. Of  course, the geological and human history here goes back far further than that — and further, indeed, than most western minds can recall or imagine.

The landscape today known as Saguaro National Park is the ancestral and traditional land of a variety of Native American tribes, including but not limited to the Tohono O’odham, O’odham Jeweḍ, and Hohokam people.

Their stories, important to this hallowed land, too often go unheard — so here is part of their narrative. 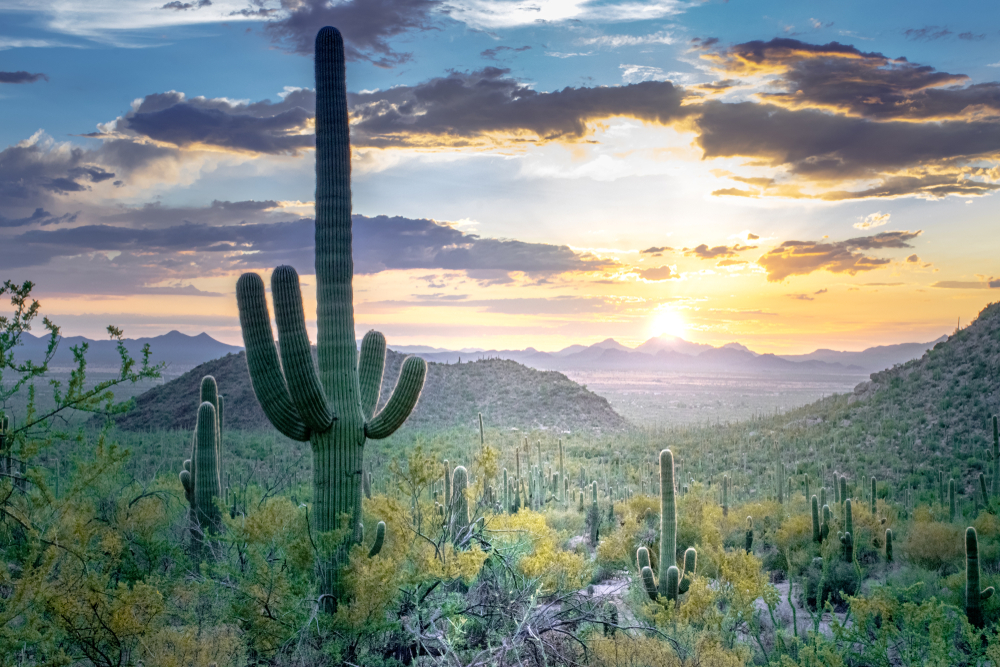 Thousands of years ago, the desert southwest looked significantly different than it does today. Around 14,000 years ago, at the end of the last Ice Age, this part of the world was lush and moist, rippling with grasslands, streams, and inland seas that made it a much more hospitable landscape. Megafauna like mammoths and mastodons roamed, making for excellent game meat for the ancient Paleo Indians skilled and cunning enough to hunt them.

However, as time went on, the climate changed — and so too did the lifestyles of the Native Americans who have traveled through and lived in this land since time immemorial. When megafauna went extinct, Indigenous peoples turned to smaller game animals (though still hunting fairly large game, such as bison), as well as traveling seasonally to follow herds of bison and to forage edible and medicinal plants.

Eventually, Natives in Arizona (and beyond) were able to learn to domesticate certain plants and animals, developing an agricultural existence that made it possible to stay in one place for longer periods of time. As more permanent settlements appeared, Native American cultures thrived here, developing complex social and political hierarchies and beautiful social rituals and traditions that are still kept alive by their descendants today. Contemporary Arizona is home to 22 distinct modern tribes, whose enrolled members continue to enact these historical practices in community and keep these stories alive. Understanding these histories is essential to understanding these landscapes, especially as westerners.

First of all, thank you for taking the time to read this write-up; educating yourself on the Indigenous history of a place you’re visiting is an excellent first step toward paying full respect to the landscape itself. After all, First Peoples so carefully demonstrated the stewardship necessary to maintaining the health and well-being of such landscapes, and their stories have far too often been overlooked and drowned out by the stories of the white settlers who usurped their lands. Along with information like this blog post and the details available through the National Park Service itself (or whichever bureau is overseeing the wilderness you’re in), you can always check the free website Native Land to learn more about whose ancestral lands you’re inhabiting, whether you’re in the country or city, domestically and abroad.

Of course, education may be a great first step, but there’s far more to do to fully embody a spirit of respect when navigating these hallowed grounds. We must also take it upon ourselves to maintain the level of caretaking that has been demonstrated to us — even when that demonstration is so often overlooked in favor of monetary gain or short-term enjoyment.

One excellent way to make sure you’re moving on these lands with as little impact as possible is to check out the seven Leave No Trace principles, which codify ethical outdoor practices into an easy-to-reference list of to-dos. They’re not hard to follow — here are a couple of examples:

You can find the remainder of the seven Leave No Trace principles at the organization’s website.

Learning more about the Indigenous history of the places we visit, and committing to continuing in the footsteps of stewardship pressed into the path by these ancient inhabitants, is the best way to ensure you’re fully appreciating as well as enjoying your journey.

All that said, we hope you adore Saguaro National Park — and we’re confident you will!