Tucked into the center of California, only about an hour and a half away from downtown San Jose, Pinnacles National Park is a surprisingly hidden gem when it comes to west-coast wildernesses; in 2019, less than 200,000 people were lucky enough to make their way to this park for a visit.

That said, those who do are greeted by a truly unforgettable natural experience: showcasing an ancient volcanic field that holds hundreds of the earth’s best-kept secrets, Pinnacles is a mysterious landscape of caves, caverns, and spiring peaks — not to mention the variety of wildlife that call it home, including bats, falcons, eagles, and condors.

But like all of our beautiful landscapes here in what we know today as the United States of America, this preserved wilderness holds human secrets as well as geological ones. This landscape is the ancient, ancestral land of the Amah Mutsun, Ohlone, Chalon, Rumsen, and other Native American tribes, whose vast history goes too often unheard by western ears. 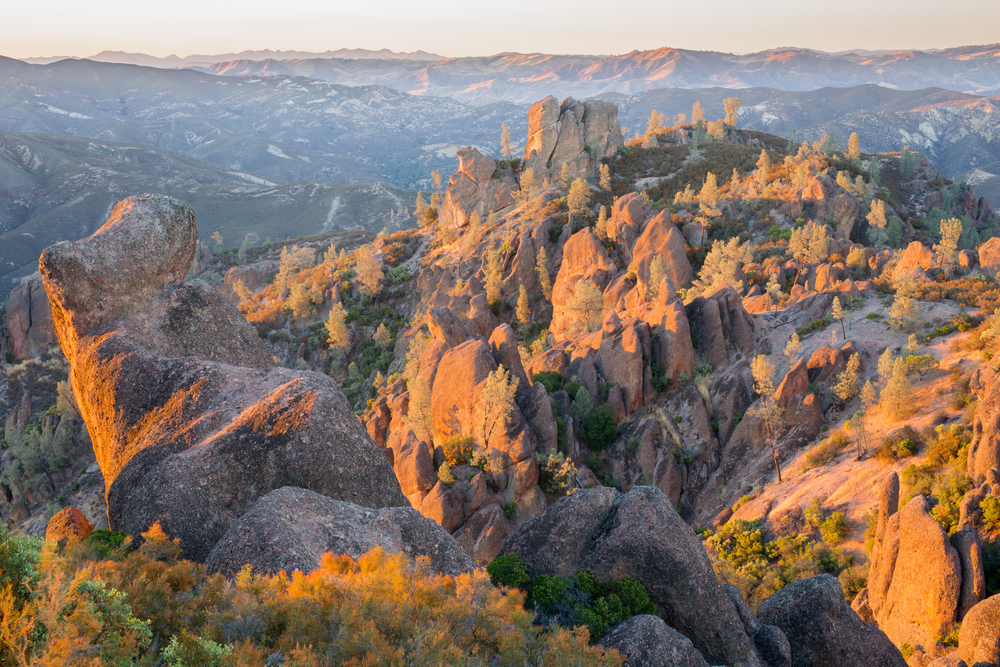 While archeologists have not found evidence of a permanent, or even temporary, Indigenous settlement within the boundaries of what is today known as Pinnacles National Park, we do know that Native Americans have lived in and traveled throughout the land we now call California for millennia — from ancient Paleo Indians, who embodied a hunter-gatherer lifestyle, to more recent tribes who were able to cultivate crops and domesticate animals, enabling a more settled way of life. Pinnacles itself is home to plenty of resources that would have proven helpful to these peoples, including oak trees (which produce edible acorns), sturdy bedrock that could have been used as a mortar to grind those acorns down into flour, and more. Native Americans also fed on wildflower seeds from the chia and red maids that grow here, and hunted local rabbits for food and skins to use for clothing and other materials.

As is true of all of the American west, and the country as a whole, colonization and western settlement completely shifted the landscape, displacing Native American and Indigenous peoples who had been here since time immemorial. While researchers continue to learn more about the Indigenous history of Pinnacles, the National Park Service has made it a point to maintain relationships to the contemporary tribal members descended from the original inhabitants of this park, inviting Amah Mutsun Tribal Band and Chalon Indian members to work, volunteer, cultivate the land, maintain their traditions, and host events in the park.

Learning more about the First Peoples who populated landscapes before westerners even conceived of them is a critical first step toward paying respect to both the land and the people who served as its stewards for so long. Along with reading write-ups like these and the information available from the National Park Service itself — or whichever bureau oversees the wilderness you’re visiting — you can always check out the free web service Native Land, which can help you learn more about whose tribal lands you’re standing on whether you’re in the countryside or city, across America and beyond.

Along with this self-education, though, we must also be sure to enact the stewardship these people we’re learning about have demonstrated for us. Leave No Trace offers some excellent, easily referenceable principles that will help ensure you’re traveling as minimally on the land as possible. For instance, Leave No Trace principles require visitors to pack out all the garbage and gear they pack in while leaving behind any tempting natural “souvenirs,” as well as ensuring you travel, camp, and build campfires only on durable surfaces or those that have already been impacted by these activities.

We hope this added context brings some extra reverence to your experience of Pinnacles National Park, a truly one-of-a-kind destination that far too few visitors are lucky enough to get to know.