Many of us have a true fascination with school bus conversions. There is something magical about seeing that traditional yellow bus turn into a condo on wheels. That’s why I was so excited when I read about this 40-foot Bluebird school bus transformation.

If you’ve ever had an itch to buy an old school bus at an auction or sale, you might be able to relate to this family’s story.

Over 10 years ago, Alison and her husband picked up a 1974 Bluebird bus and parked it in her sister’s backyard. There was nothing fancy about this yellow beast with its rows of seats and plain Jane interior, but Alison loved it from day one. 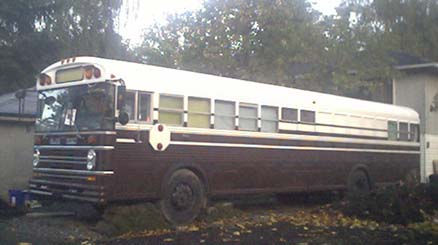 Over the years, they renovated parts of the bus is short bursts. They lived in the bus in its partially renovated form for five years in East Vancouver. They had an awesome view, a garden to call their own, and their oldest son was even born inside the bus! Basically, they lived the ups and downs of life inside the bus during its transformation.

Then Alison got pregnant again and the couple decided it was time to move forward. Together they rented a house in a small town and lived a whole new life. It was hard to leave the bus, but they knew it was for the best.

Four years passed and then serendipity struck. During the winter they met a local farmer who was interested in letting Alison’s family park their bus and this on his land if they would help out on the farm. It was a dream come true. The family longed for a chance to live a rural life that was self-sufficient. Of course, after several years and two children, they weren’t sure if going back to living in Eliza Brownhome (the clever name for their bus) would be easy. 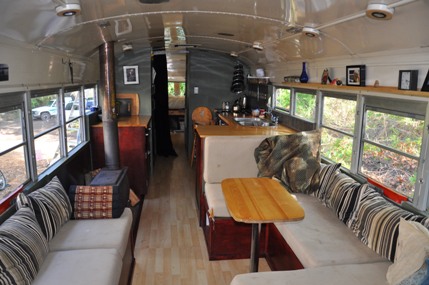 Eliza Brownhome is a tiny house of about 300 feet — for a family of five. This may seem impossible, but with some clever storage solutions the family has made it work. The key has been lots of planning and organization, and in most cases this family has succeeded in creating a true home within a school bus.

As you can imagine, the process of fitting the contents of bedroom house into a 7.5 x 40-foot space was tough. The family downsized considerably, but still had to rent storage for their furniture and a few of those “special things” they loved. It can take time to know what you want, versus what you need.

This photo below shows the bus looking from the front to the back. Notice the living area, the woodstove and the curtained off bedroom near the back. Eliza has some clever sleeping options, including the couch, which will sleep one, and the dining table that can be removed so the other couch will sleep two. While this may not be a long term bedroom, it works well for short term visitors. 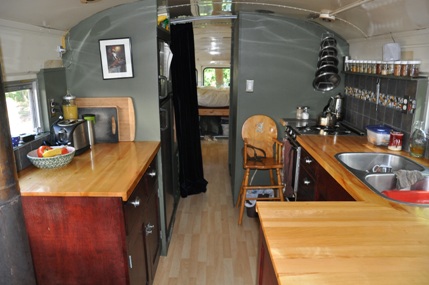 The kitchen has custom cabinets crafted by Alison’s father. For this tiny kitchen the family spent a lot of time planning the space. They needed everything to be within reach, but they also needed storage! Believe it or not, they got everything from their former home (which had a full size kitchen) into their new mini kitchen. (Although they did leave the turkey roaster and the canner behind 🙂 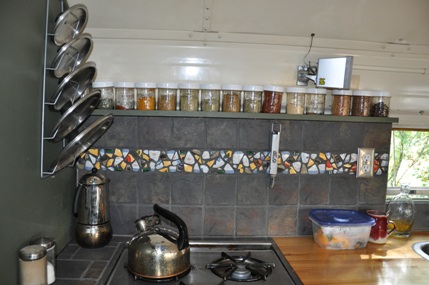 Since Alison wanted the bus to feel like a home, Eliza Brownhome features a tile backsplash and a well placed spice rack. They also put in a tiny strip of tile to serve as a built in trivet on the counter – genius!

The pantry is above the propane furnace squeezed in between the fridge and bedroom closet. The pantry is filled with every delicious item you might expect in a well stocked kitchen. 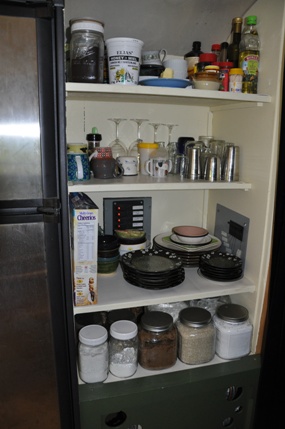 I took a while to get used to digging for things. Everything is either hidden very deep or under something that needs to be moved. At first, this caused frustration, but in time they got used to it are simply glad to know everything they needed fit in their homes.

Alison decided to use bins to store items whenever she could. Bins simplify storage by grouping items together for better organization. All of the baking items are in one bin, produce such as potatoes and onions are together in another, while tea and coffee reside in an additional bin. 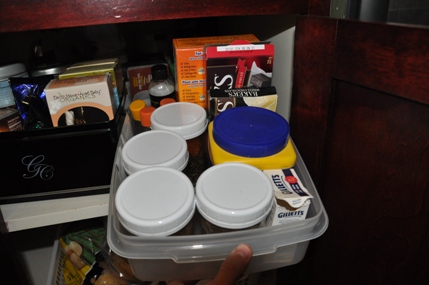 The bedroom features a queen size bed with underneath storage where they can slide tall Rubbermaid bins packed with towels, seasonal clothes, and shoes. Near the front of the storage the dirty clothes are stored along with cloth diapers. 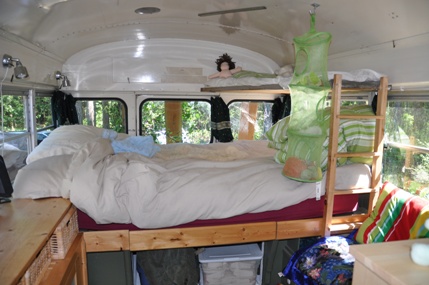 In a tiny house, everything must be multipurpose. In this case the bedroom closet light is also the night light and the hall light as needed. 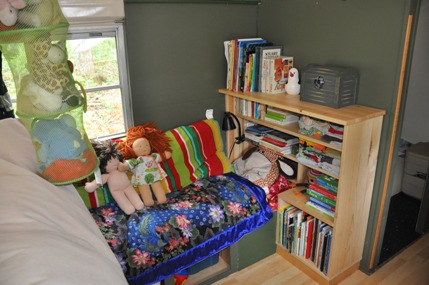 Since the children are little they utilize the small couch as their play area. This coach has built in toy storage and at night becomes the four year olds little bed.

In case you were wondering, the family DOES have an indoor bathroom. Some people avoid adding a bath when renovating a school bus, but Alison’s family knew it was essential. They put in a small sink, medicine cabinet and a chemical based port-a-potty. 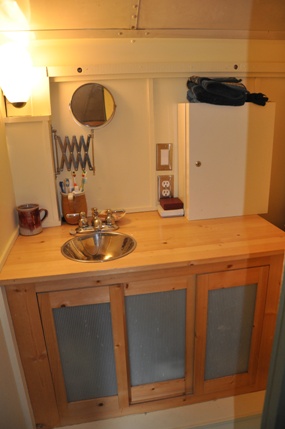 Unfortunately, they used every inch of space and did not install a shower. This has been a huge regret for the family and may be something they have to change in the future. When they lived in East Vancouver they used Alison’s sister’s shower. Out on the farm, without this option is has been a challenge!

Because the family works from home an office was essential. Again, they decided to make this space multi-purpose. The desk serves as an office during the day and a media center at night. The desktop was created using an Ikea top over filing cabinets. 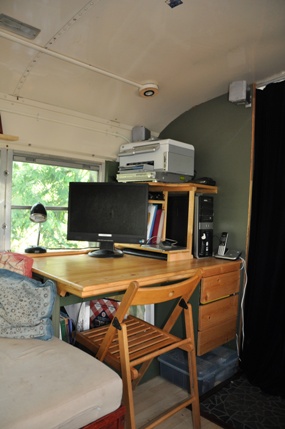 Everything has a spot that it can be tucked into. The desktop can be used as a space for the kids to do puzzles, color, etc. Beneath the desk, they placed additional bookshelves and laptop storage. As you’ll notice, every empty space has been filled with shelves or other storage opportunities. 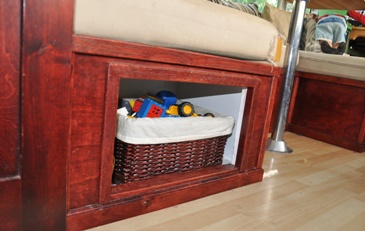 Wood for the fire is stored under the couch that is closest to the woodstove. Everything has a place and everything must return to its place in order to keep Eliza Brownhouse in tip top shape. 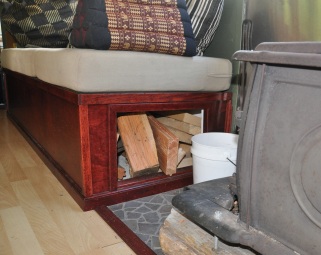 Alison is often asked if they moved into a bus because they lost their house. The answer is no. In truth, they were renting a house for $1,200 a month and had no issue paying the bills. They moved as a lifestyle choice.

The simple fact is that the thought of raising a family close to nature, with simple needs and lots of imagination appealed to the couple. 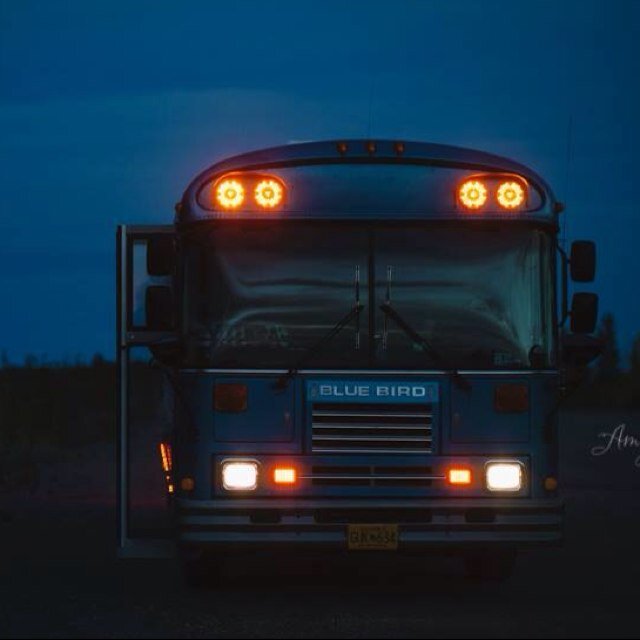 Here are a few more interesting things to note about Allison and her family:

Their story is well documented on the BluebirdMama blog. Here you will find an active space where people ask questions and make interesting comments. Be sure to check it out if you want to learn more.

Also, if you’re a fan of the HGTV Design Star show you might like this episode which features school bus makeovers. Eliza Brownhouse can be seen around minute four.

Eventually Alison’s family outgrew the use of the bus as their exclusive home. To accommodate their needs they built a 12 x 24-foot cabin right onto the side of the bus. The cabin has a real bathroom with a composting toilet and a bathtub, a larger sleeping space for the kids, an area to eat dinner and play together, and a laundry room. The family loves it. 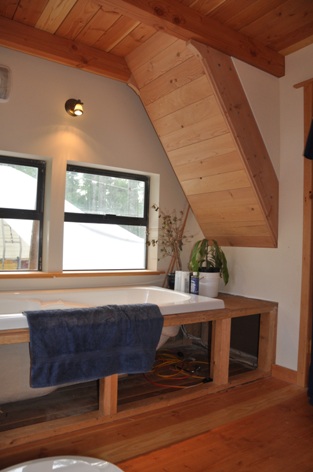 All of the materials for the cabin, including the doors, windows, appliances and fixtures all either came from Craigslist or were given to them by friends of the family. They even used wood milled from trees on the farm. This family knows what it means making every purchase count!

The concept of bus dwelling is not new. In fact, there are people all over the country traveling or living stationary in some form of bus conversion. Here are a few other places to learn about converted buses as a lifestyle. 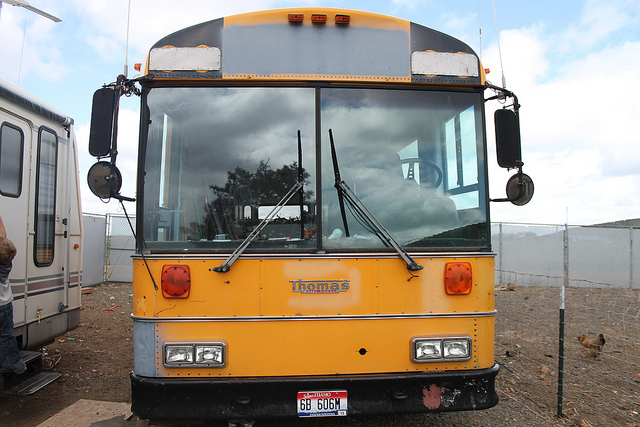 The Unschool Bus: This family travels full time and teaches their kids along the way. They embrace their “non traditional” lifestyle and believe experience is the best teacher. They started their blog in 2008 and have lots of interesting stories and photos as the family learns and grows together. Wow! What a journey.

Mike and Natalie Young: This newlywed couple decided to renovate a rig in a friend’s backyard. From there they plan to travel from Austin, Texas to the state of Washington as their new home. This couple did few renovations and has kept the rig as simple as possible.
The Eagle Bus: A 1990 Eagle which retired from daily commutes between Mexico City and LA in 2010 is now an old west house on wheels. This rig is unbelievable with its custom wooden interior and unique art pieces built into the walls and seats. It took the couple over 3 years of building full time to create this labor of love but boy was it worth it. It’s hard to believe this was ever a transportation bus. Now it looks like a old west cabin!

A bus is merely a canvas for a tiny house. The challenge comes with the rounded ceilings, the abundance of single pane windows,  and the plumbing. Whether you love RVing, or you dream of owning your own tiny space, a bus conversion may be just the thing for you!

What about you? Would you live in a bus? What features are most important to you and how would you adapt the interior space? Leave your thoughts in the comment box below.

Why You Should Get a Dashboard Camera for Your RV