RV in the Neighborhood vs Prairie Village, KS 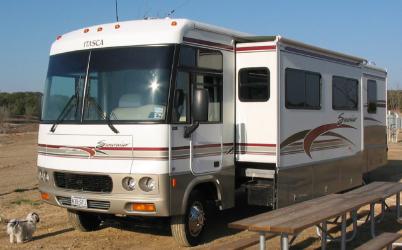 RVs– people either love them or hate them. To some, they epitomize the freedom of the open road, just as a sailboat or yacht makes a sailor feel. Other people see a camper or a motorhome as something the Napoleon Dynamite character, “Uncle Rico,” parked in a pasture, to practice football passes, while his clothes dry on a line. When a person sees a coach pull into a driveway, they may envision the passengers as flaunting their wealth and lifestyle, or they may see hillbilly in-laws. 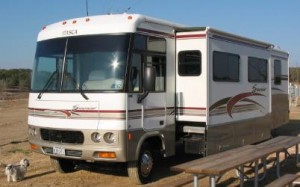 Regardless of one’s personal view, an RV in the neighborhood–whether just entering or being stored–will certainly be noticed, and is bound to start a few conversations. For example, residents of one Prairie Village community took matters into their own hands and sent the following message:

So, the “Dear Neighbor” letter begins. It details how the woman’s neighbors are ” interested in having a nice, attractive street” and that an “RV parked in the driveway makes that impossible.”

Along with implying that the woman was likely planning to move the RV and requesting that she do so quickly, the helpful neighbor–or as indicated in the typed note, the neighborhood as a whole–suggested several neighboring communities in which a motorhome parked in the driveway would be more appropriate. Some would argue that the recommended alternatives are just as nice as Prairie Village.

First, consider Prairie Village. In 1949, the National Association of Home Builders referred to it as the best planned community in America. Located merely a few miles from the Country Club Plaza in Kansas City, MO, the founders developed the village near a portion of the historical Santa Fe Trail, as a spur for growth near Kansas City. The picturesque community still features parks, scenery, and rural spaces.

In 1951, it officially became a city. As part of affluent Johnson County, KS, it is highly esteemed in the area. In fact, it has the highest per capita income in the state and one of the highest in the country. It is a beautiful place, and it may not be surprising that the residents of the county have a bit of a reputation for being elitist, to the point of being snobby.

The note mentioned Troost as an alternative location. Named for the first doctor to move to the area, Troost Avenue has had its less-celebrated moments in history. As a major north and south thoroughfare, the street has long been considered a racial and economical dividing line for the city. Originally, this division was legally enforced.

To suggest that the street’s history dictates its habitability and desirability shows ignorance of the actual terrain. In reality, the road covers many miles. This means that it travels through less-affluent neighborhoods, as well as more prestigious ones.

In fact, the street was once referred to as “Millionaires Row,” and features many of the city’s most beautiful pieces of architecture. To totally dismiss Troost Avenue is as divisive as suggesting one avoid going to the “other side of the tracks.” Not only is it inaccurate, it is potentially offensive to the hundreds of thousands of people who live there.

Independence was suggested as a more appropriate place to store an RV, perhaps because it has been referred to as the “Meth Capitol of the World.” The fourth-largest city in Missouri, this is actually a satellite of Kansas City, but it is speculated to become a suburb one day, as the two cities continue to sprawl toward each other. Originally the point of origin for the California, Oregon, and Santa Fe Trails, it was dubbed the “Queen City of the Trails.” Independence has a thriving art community and hosts a yearly festival called “Santa Cali-gon Days,” in honor of the city’s contribution to western expansion.

Along with its rich demo-graphical diversity, Independence is steeped in history. As the hometown of President Harry S. Truman, it hosts the Harry S. Truman Presidential Library and Museum, as well as the Harry S. Truman National Historic Site. Joseph Smith Jr., founder of the Mormon Church, decreed the city as the center for the religion, and there are several attractive temples and churches dedicated to that belief, near the Jackson County courthouse.

Along with other options, Gardener, KS, was mentioned. Also located in the same prestigious Johnson County as Prairie Village, Gardner, KS, was where the California, Oregon, and Santa Fe Trails divided. Founded in 1857, it hasn’t grown to the size of some of its neighbors. It does, however, boast an active and welcoming community.

The 83-acre Celebration Park, for example, offers a playground, a lake, and open areas, for visiting in a relaxed environment or enjoying socializing within the community, as well as walking and jogging trails. Two shelter houses are available for gatherings such as anniversary or birthday parties, and there are several barbecue grills provided for neighborhood use.

Additionally, soccer and baseball/softball stadiums ensure fun for the whole family. With snacks and drinks for sale at the Celebration’s Concession Shelter, a trip to the park can easily and comfortably become a day-long event.

Even if this woman’s neighbors didn’t necessarily care if she removed the RV from the neighborhood, there are actually several reasons why it may be a good idea to do so. When stored in a driveway, the RV runs the risk of damage from the following potential elements:

For these reasons, it may actually be more advisable to store a motorhome at an RV and trailer storage lot, many of which have covered, and even locked, structures for the customers’ security.

Although there are several reasons for storing an RV somewhere besides one’s driveway, it is obvious from the tone of the letter, that these were not among their concerns. The irony of the issue is four-fold. First, these nearby cities were hinted at as being less desirable than Prairie Village, when that is only the opinion of the “neighbors.” Second, although it is signed from “your Prairie Village neighbors,” there is no real proof that this typed letter is from more than one anonymous individual.

Third, unless there is an HOA rule stipulating that all “recreational” vehicles–including boats and motorcycles–must be stored elsewhere, there is nothing inherently wrong with it. Fourth, it wasn’t even her RV in the neighborhood. They sent the letter to the wrong house.

Perhaps, when planning to store something as large as a motorhome in the driveway, it is a good idea to research the rules of the neighborhood, as well as the tolerance of the neighbors. Share this story with your fellow RV owners– as a friendly warning.

Kansas—a land of endless plains and farmland. There isn’t much…

Most people don’t consider Kansas a very adventurous place to…

15 Landmarks to Visit in Honor of Black History Month

From some places you’ll likely recognize immediately for their significance…