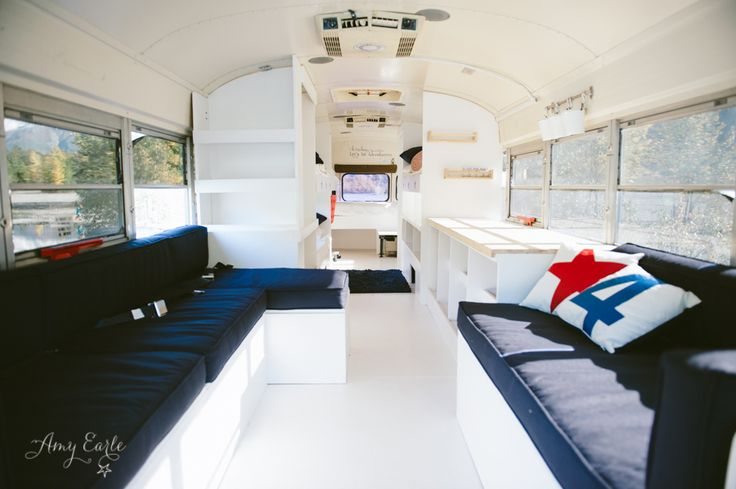 This is the story of a family who left behind the trappings of traditional life and went on the ultimate adventure — in a school bus! Yup, that’s right, I said school bus. The Earles, a family of six, took a 6 month sabbatical and traveled around in a renovated school a bus.

The family purchased a 1997 Bluebird bus on Ebay and turned into a rolling home. Jake Earl and his sons did some work to the interior, including removing seats and building bunks, storage, and benches all in just one week!

With the initial remodel done the family hit the road on a dry camping adventure from Florida to Alaska. At the end of their 5,000 mile journey they began the second phase of their ultimate school bus makeover. The family painted the interior of the bus and finished the upholstery. Once that project was complete they tucked the bus into the belly of a large ship and sailed it from Anchorage, AK to Seattle, Washington. (The renovated bus even went for a sea voyage! How cool is that?) 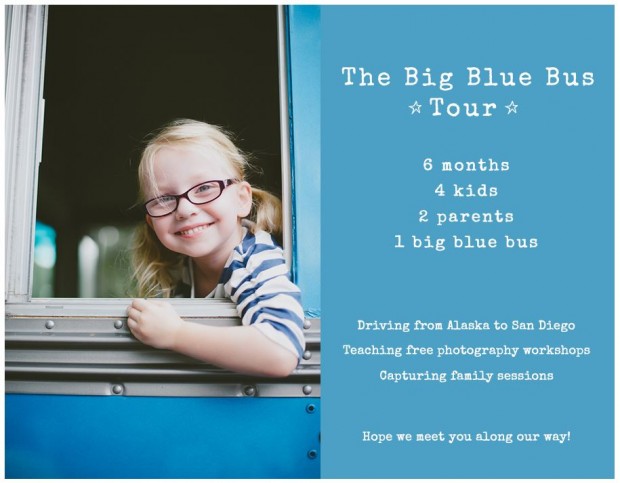 The fall and winter were spent exploring the west coast and Arizona. Amy Earle is a professional photographer and was thrilled to capture both the scenery and her family in photos along the way. Amy was also able to teach live photography workshops and meet and greet avid photographers all over the U.S.

The Big Blue Bus Tour (as the Earle family called it) started as a 6 month break and turned into a year long journey of 15,000 miles.

Now that you know the story, you may be wondering what the Earle’s did to their their 1997 school bus. As you can imagine, a renovated bus is a big project.

The first step for the family was purchasing an excellent bus. Jake found the school bus on Ebay. The bus was incredibly well cared for and had only 137,000 miles (low for a school bus). The Earle’s knew they needed to find a rig that had sound mechanics before they started their renovation. 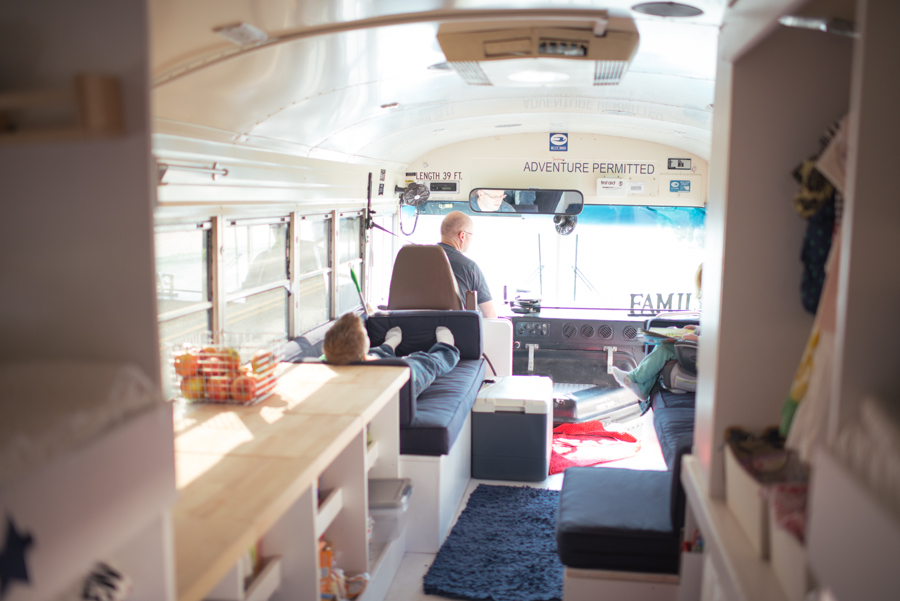 Once purchased the family removed the chairs and sold them on Ebay. With the bus gutted, they painted the walls and floors white and added pops of red. The guys built everything from bunks, to the kitchen, to benches in just one short week. The goal was to make the Big Blue Bus feel as home-like as possible while providing space for roadschooling along their journey. 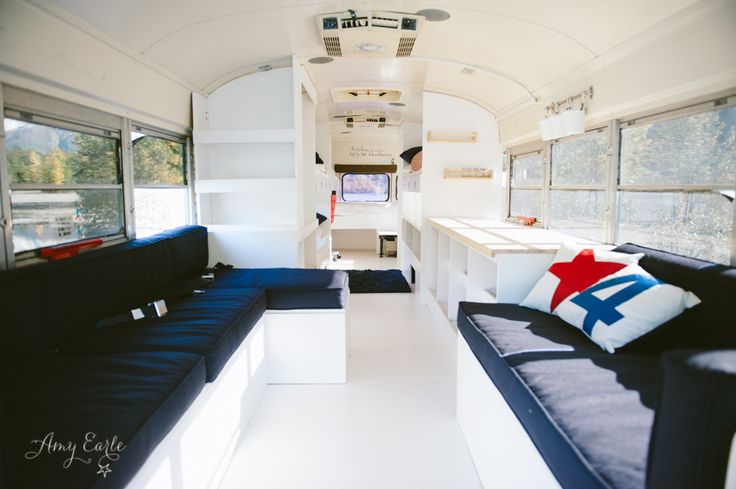 The main challenge was the lack of a regular bathroom. The Earle’s decided to utilize public restrooms and Thousand Trails campgrounds on their trip. Since the family was on a tight budget and a big hurry they avoided putting in full shower facilities (and admittedly missed them). Because they were traveling with small children, they did create a private area for the port-a-potty. They chose a unit with small disposable bags as an easy way to keep it clean as they traveled. When they couldn’t stay in campgrounds they utilized an outdoor shower in a privacy tent. 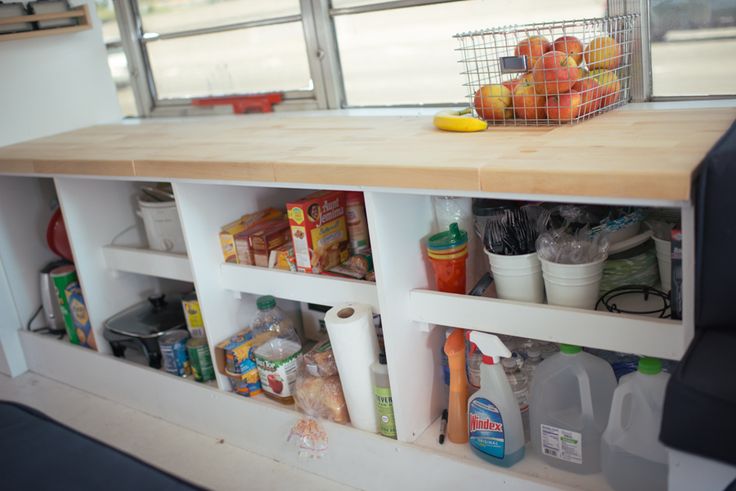 Amy’s kitchen included a small cooler, Crockpot, griddle and grill. There are water tanks under the bus so they could add plumbing at some point if they wanted to. 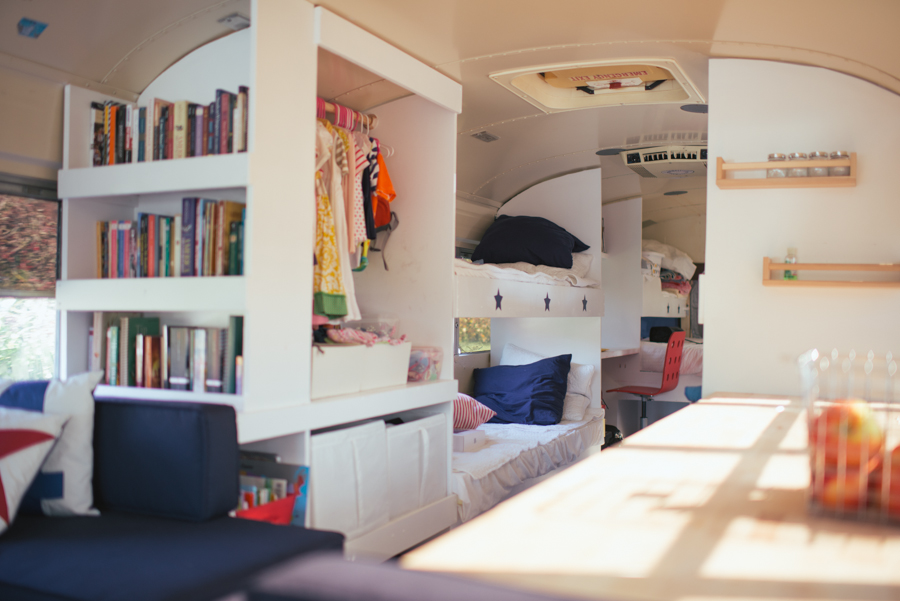 Once the family of 6 had downsized to only what they could carry on the bus (plus items stored in a 10 x 10 storage unit), they were ready to roll.

To read more about the Earles family, their bus, and their adventures, take a look at their website, Simply B Photos.

What do you think about the Big Blue Bus? Would you convert something like this? What would be on your MUST HAVE list? Add your comments below and then share this article with your friends.

Mark Herbet is no stranger to the Burning Man festival…

We Asked RVshare Employees: What’s Your One Must-Have Travel Item?

We all have it. That one thing that if you…

10 Instagram-Worthy RV Rentals That Will Fulfill Your #RVLiving Fantasy

With RV living on the rise, there’s no shortage of…