If you’re looking for a new RV, you might want to consider the world’s smallest and lightest rig on two wheels. It’s called the Cramper Van and there’s nothing else like it.

This viral sensation is the invention of Andy Sunders, a British custom car enthusiast. Saunders loves to create weird and sometimes wacky mobiles and this campervan is right up his alley.

He crafted this creation by removing the front six feet of a Bedford Campervan (a popular caravan in the U.K.). He then attached the van to an old fashion pedal cart and refit the interior to work as an RV. The results? An RV worthy of a Flintstone’s episode with Fred and Barney is peddling to the great outdoors.

The Cramper van offers four by four living. That is — four feet of space including seats, a stove, a table and a bed. The roof extends up and out by two and a half feet making just enough room for a tiny bedroom. Since the Cramper has no engine, you’ll need good, strong legs to make the wheels on this house roll.

Classified as a bicycle, the cramper van can’t go out after dark, but is perfect for flat roads with backwoods camping! 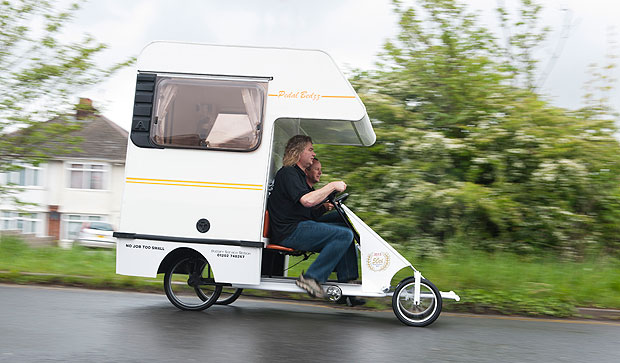 Want a Cramper? Saunder’s says it’s not for sale. He created it simply for the fun of it and everyone that sees it says wow!

What about you? Would you want a Cramper Van? Leave your thoughts and comments in the box below. Need to share this crazy concept? Great! Text it, tweet it and post it everywhere. Thank you!

Why You Should Get a Dashboard Camera for Your RV