When Christine Bree and Glenn Wills decided to design their dream camper, they knew it would be a challenge. They pushed aside their misgivings, worked through the challenges, and brought their vision to life. What they didn’t realize was how popular it would become with other campers.

Their creation, the Gidget Retro Teardrop Camper, is an innovative, lightweight, and compact marvel. But don’t let its small size fool you, this camper is the definition of luxury. 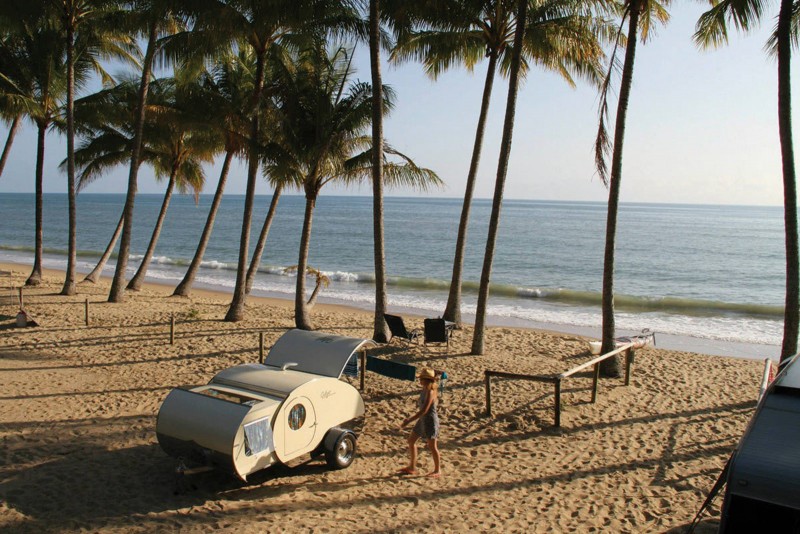 The Gidget features many of the same amenities that you’d expect to find in a motorhome or larger travel trailer. This is possible because of a pod that slides out and almost doubles the interior space. Which means that you can even fit a queen sized bed in the trailer! Other amenities include:

The Gidget was born and bred in Brisbane, Australia which just happens to be the perfect place if you like weekend adventures and long road trips. Since it’s inception, the Gidget has sparked the interest of people all over the world. It’s perfect for those who love the outdoors, but who don’t want to deal with the weight and cost of a full size RV. 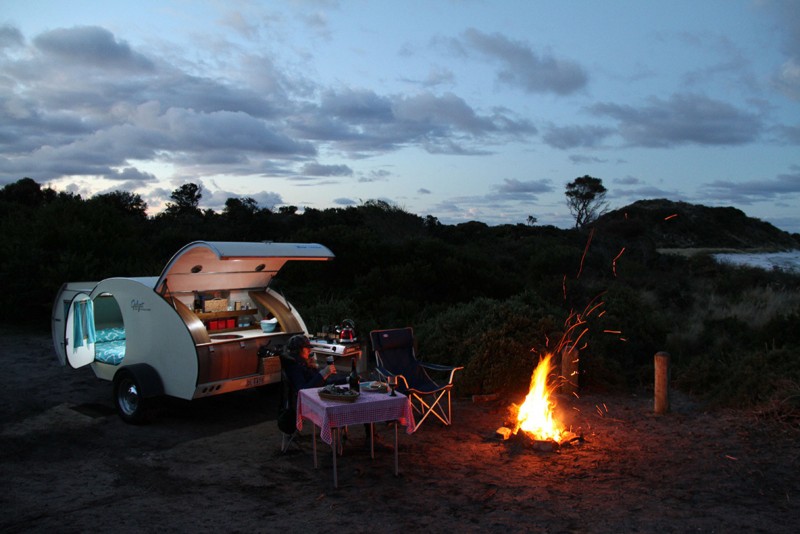 Both Bree and Wills are in love with the great outdoors. They enjoy kayaking, bushwalking, and camping in both remote areas and national parks. But they didn’t like the confinement that they felt in a large RV. In other words, they wanted the ability to hang out outside and relax, instead of being cooped up inside an RV.

The duo tried camping in tents but they were frustrated by the process of packing, unpacking, and setting up. So they created the Gidget to enjoy camping in style and comfort.

Bree and Wills used the popular teardrop camper model, which has been around for years, as a template. Their high quality Gidget has all the features needed for a luxurious camping holiday. It is also fully self supporting and eco-friendly.

When creating the Gidget, Wills designed and built every aspect of the prototype by hand including the metal chassis, timber work, and plumbing. Believe it or not, this project was right up his alley. As a youth, Willis was an apprentice to his carpenter father. During this time, he built and restored homes ,as well as classic boats and cars. I guess you could say that the Gidget was engineered by someone uniquely qualified to build a tiny mobile home.

After the prototype was finished, Bree and Wills started traveling. They drove around Australia for over two years, a journey of over 34,000 miles. This trip gave them the information they needed to work out any kinks and refine the Gidget’s design.

All their hard work has paid off and their design has taken the teardrop camper to the next level. The Gidget is fuel efficient, aerodynamic, and innovative. Plus, the slide-out takes less than 30 seconds to open up. 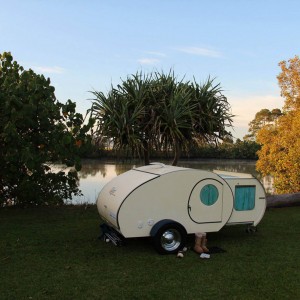 The Gidget also has a functional kitchen so entertaining and cooking can all be done in one place. It comes with many amenities including:

The Gidget currently comes in two models — the Bondi Original which retails for around $12, 655 U.S., and the larger Noosa Longline. This model has extra storage space, a bigger kitchen, and space for a shower compartment. It retails for around $15,780 U.S. There’s also a third model, called the Bells, that is still in the design stage. Plus, Bree and Wills are planning to create a Super Compact Gidget for bikes.

What do you think of the Gidget? Would you like one of your own? Share your thoughts in the comments below.

So you just got your first renter…now what? Or you’ve been renting for some time with RVshare. You’ve been communicating…

One of the many benefits of having a home on wheels is the ability to escape the harsh, snowy winters…

Whenever I open up Google Maps, I get excited because I know that I have a whole world to explore….

How to Stay Fit on the Road with the Adventure Allens

Before we dive into how to stay fit on the road, let’s define the word fitness. According to the American…

Glacier National Park is a treasure trove of natural beauty. The park is vast and its landscape changes dramatically from…

How To Transition To Living In A RV: AsoboLife

If you’re like us, you might have several strong reservations about moving out of your home and into an RV….