Surviving a Yukon Winter in a Dodge Tradesman Camper Van 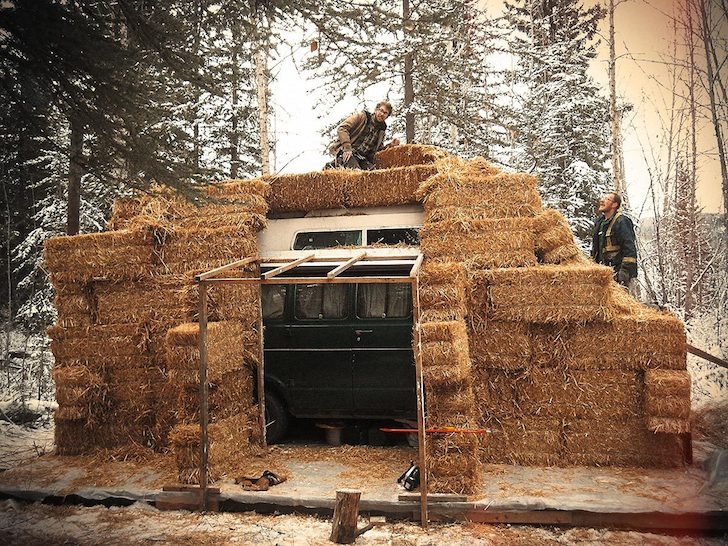 Would you spend an entire winter in Canada’s Yukon Territory? How about in a camper van? Filmmaker and musician, Cud Eastbound, recently did just that.

He and his 1977 Dodge Tradesman Camper Van arrived in Dawson City, Yukon after traveling through Canada for two months Winter temperatures in the Yukon can reach -68 degrees Fahrenheit, so how did Cud intend to live in his Camper Van? Find out below.

The first critical task was was to find a way to heat the camper van. The solution? He built a wood stove before he left Halifax that fit perfectly in his van. 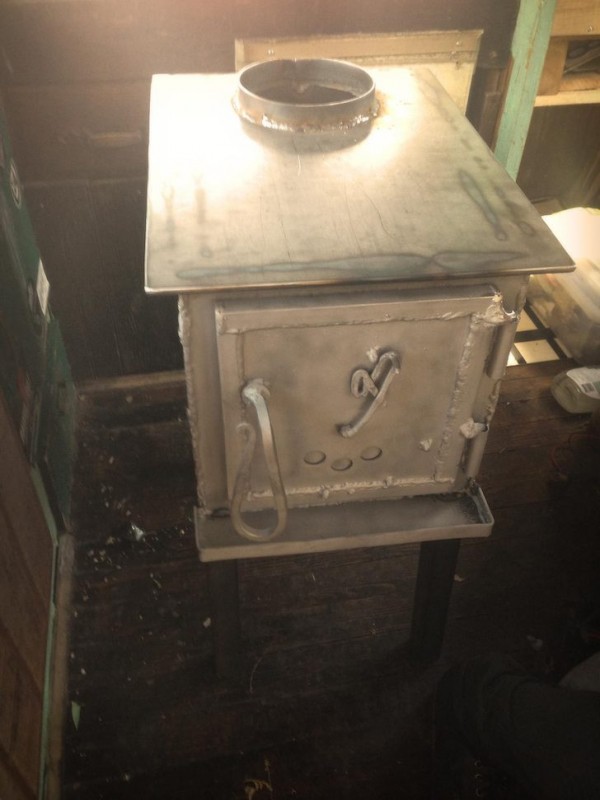 Next he needed to figure out how to keep the heat inside the van.

Cud and a friend set about clearing an area to make room for the camper van. They then laid 2″x 6″ pieces of wood on the ground and creating a platform for the van to sit on. 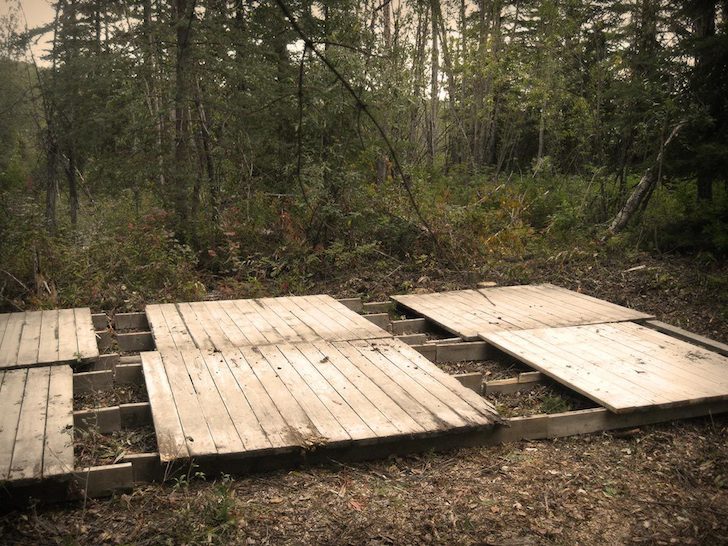 The idea was that parking the camper van on the raised platform would minimize permafrost from reaching the van. 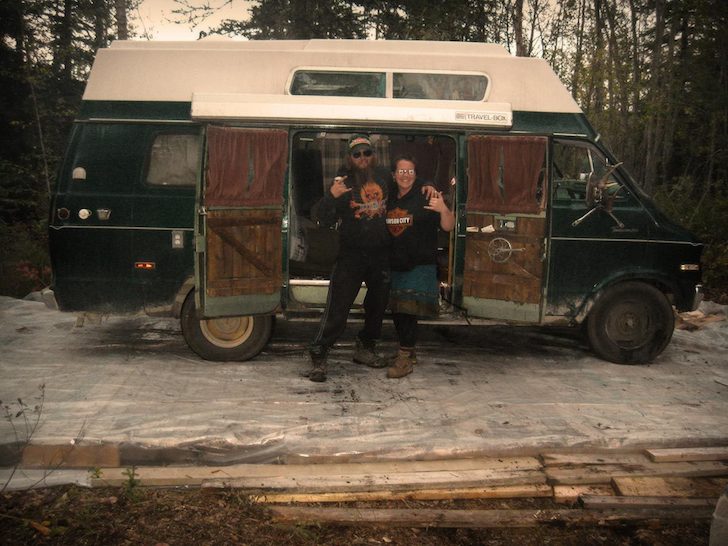 When the van was in place Cud installed the wood stove he had made back home in Halifax. The chimney is triple lined and was rebuilt twice to make it just right. 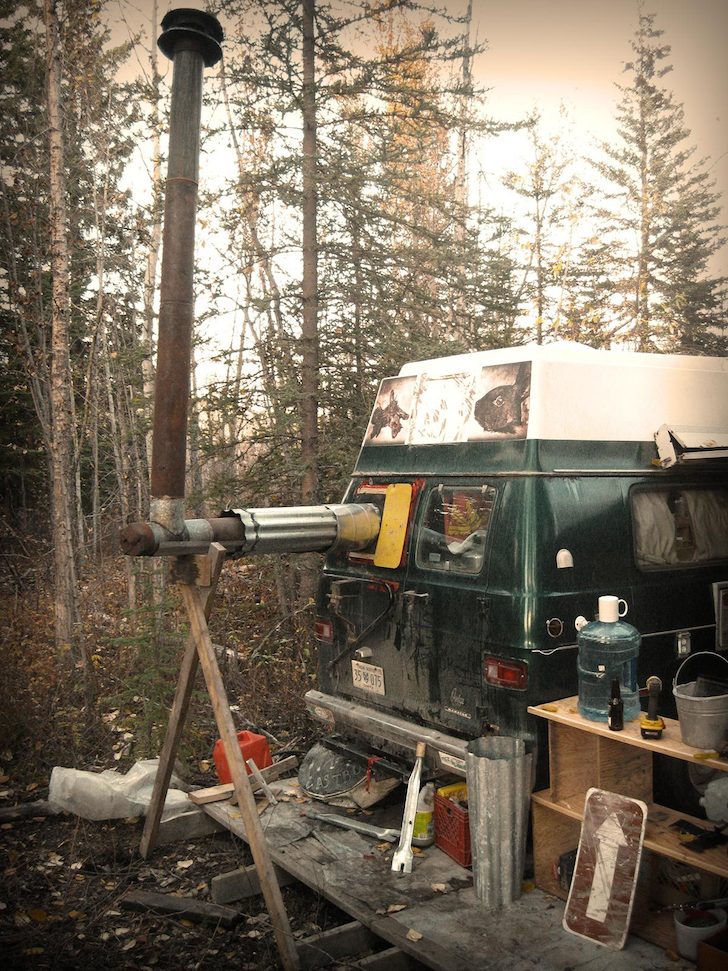 The stove and pipe is lined with corrugated tin sheets and a layer of metal. 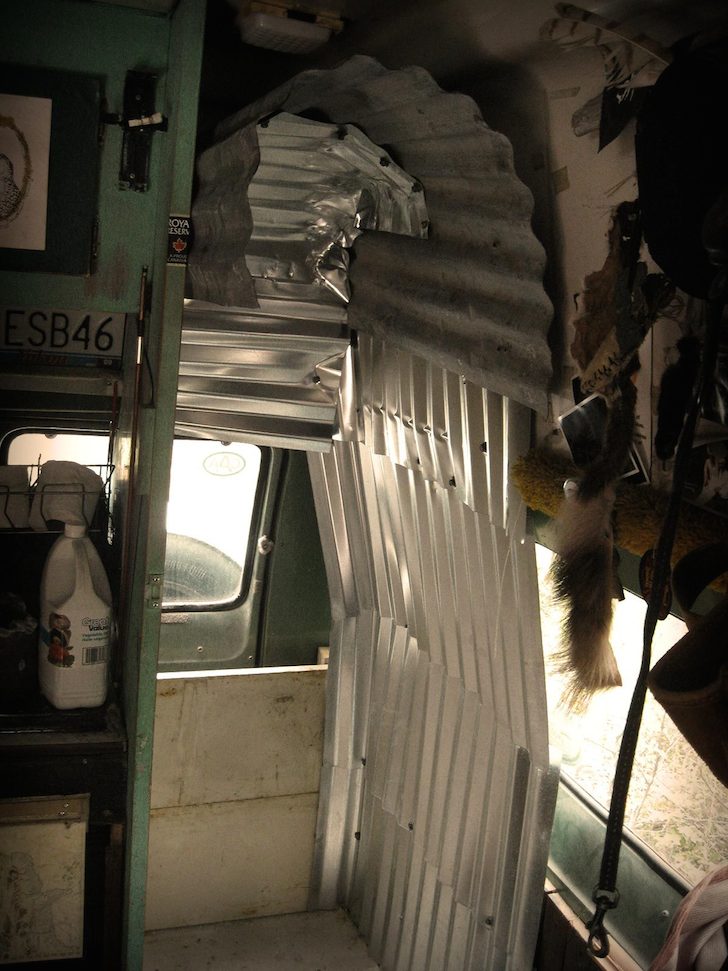 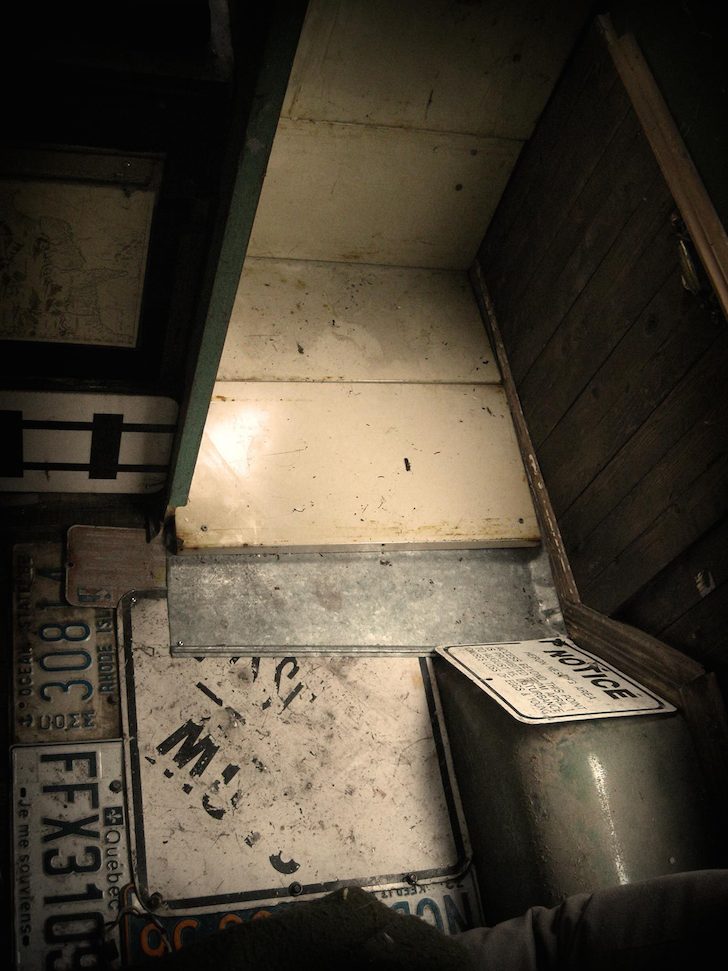 With a large supply of firewood, Cud had no reason to worry about generating heat. 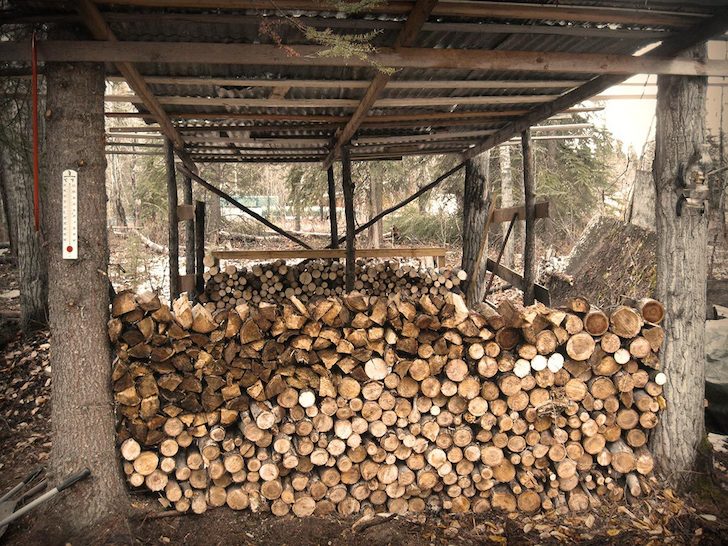 The interior of the camper van might not be elegant to look at, but for Cud it works just fine. He took out the driver’s seat and installed shelving to serve as his office/entertainment center. 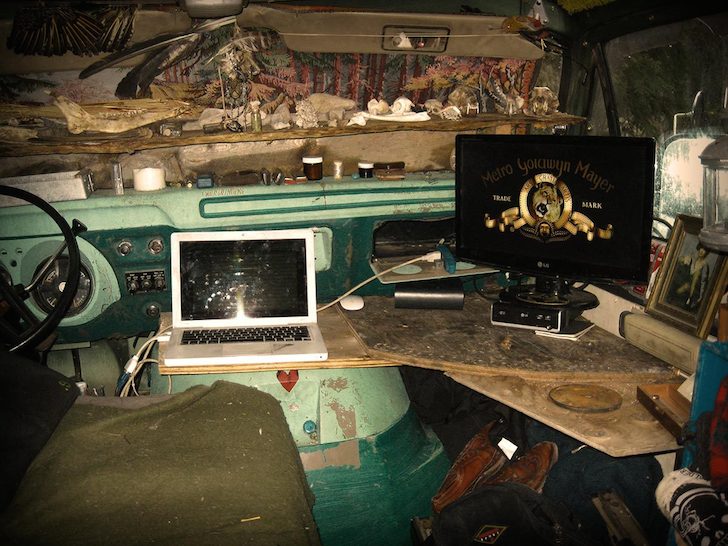 With the arrival of the hay, the insulation of the camper van could finally begin. 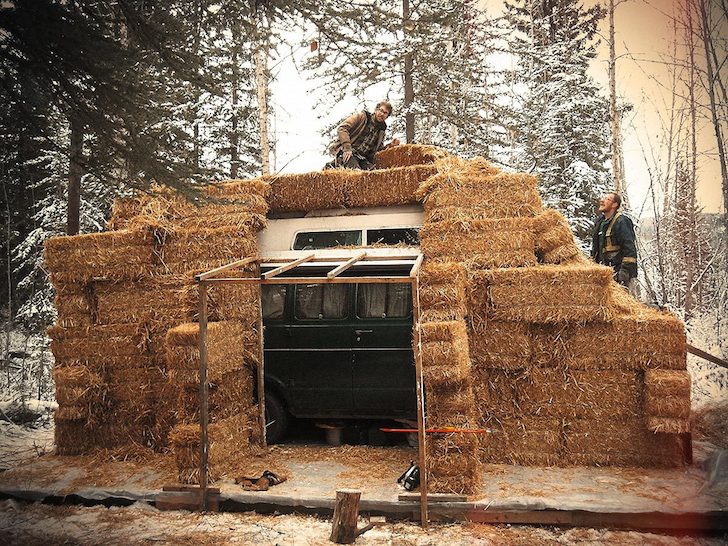 Bales of hay were stacked around the outside of the camper van until it was completely covered in straw. 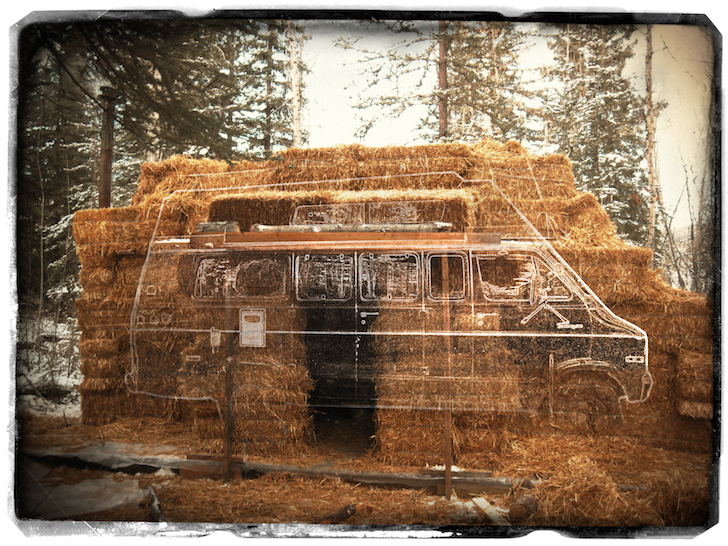 The insulation was finished off with a tarp. Cud originally planned to add ‘cob’ or dry earth on top of the tarp, but the ground was already frozen. 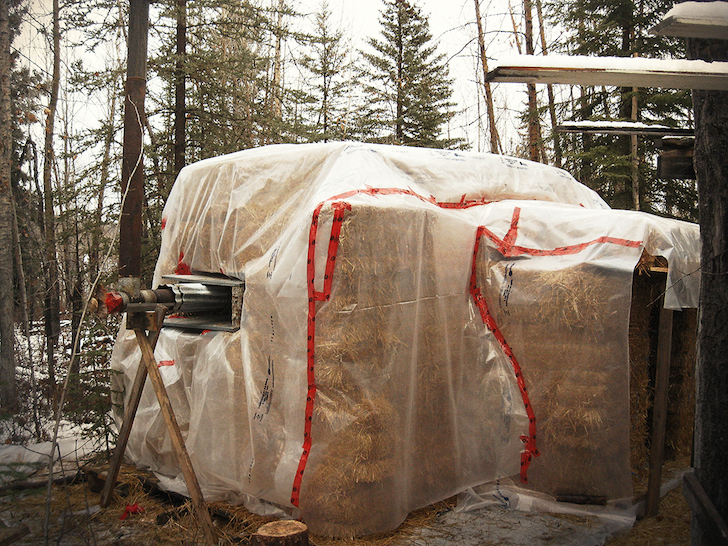 A dug out hole in the ground would serve as his outhouse, though he did add a frame and a tin roof to keep prying eyes away. 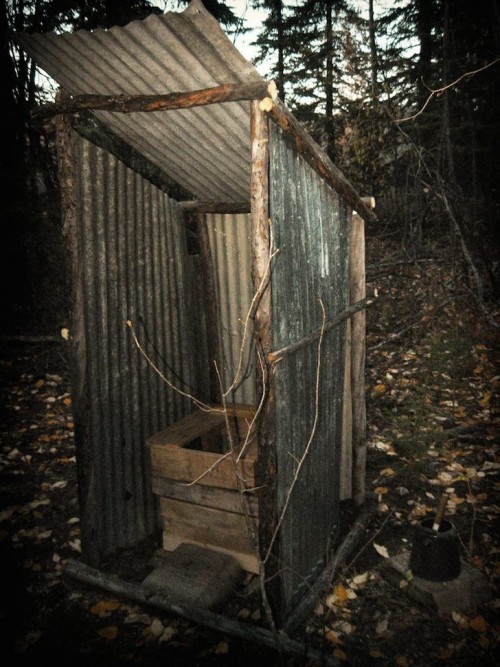 By November, temperatures in the Yukon had dipped down to -25 degrees F,  but Cud was still warm and toasty in his camper van.

You can read more about Cud and his winter in the Yukon on his website.

Would you dare spend the winter in your camper van? What would you do differently? Tell us below.