For over 60 years, Volkswagen has been producing convenient conversion automobiles in the form of the camper van. These are smaller than full-sized vans, so they are more fuel-efficient than larger motorhomes. They also have the ability to become sleeper vehicles with little effort, making them perfect for camping trips, as well as impromptu overnight stays. 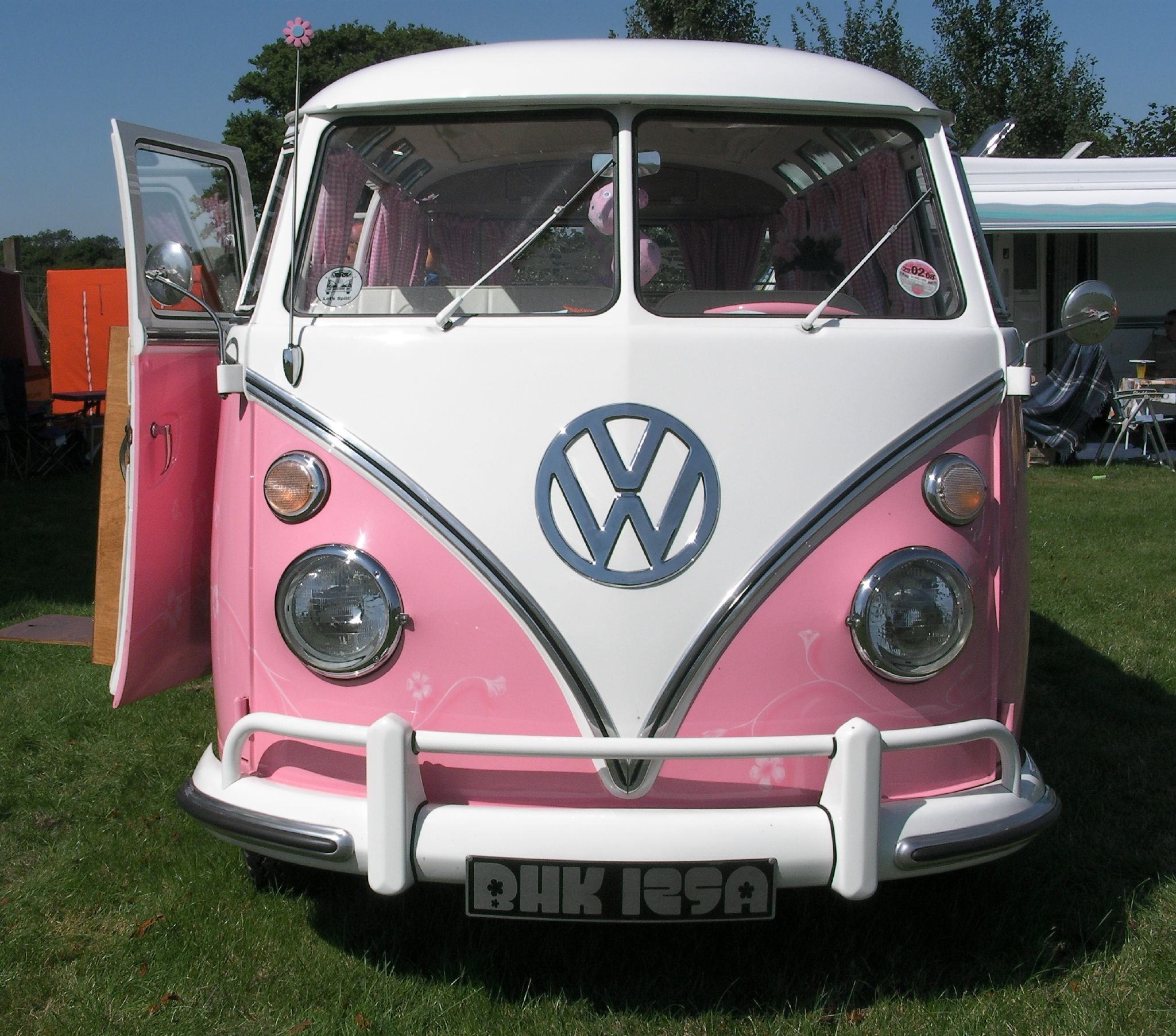 Over the years, Volkswagen has released several clever promotional campaigns. Many of these emphasized the enjoyment of a family as they frolic and relax near their van. Some described the virtues and amenities that the camper vans possess. Others presented diagrams of what the interior looked like or how the expansion features work. All of them were designed to make prospective buyers long for the high-tech freedom this innovation offered. Take a tour through the decades, as you peruse the following vintage Volkswagen advertisements. 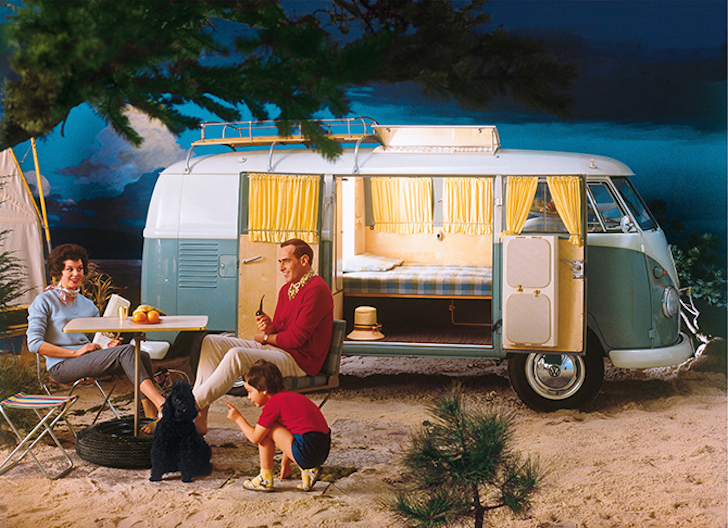 This vintage camper van provides all this family needs for a great vacation. This advertisement was so successful, it was used again. 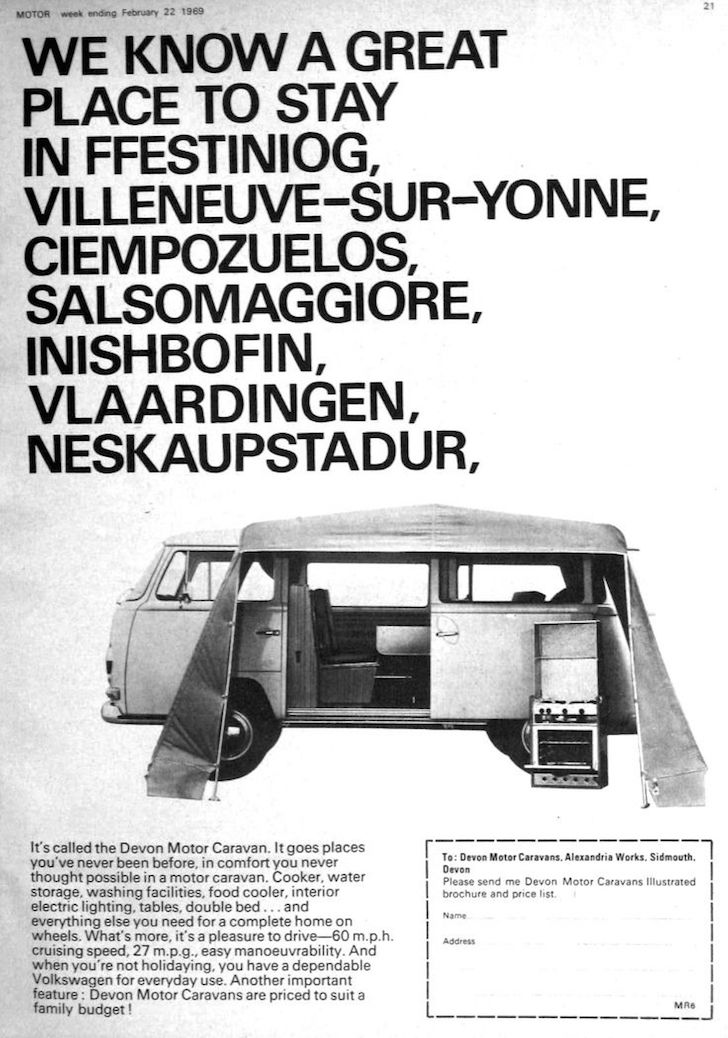 With the typical–and expected–features of a motorhome, this model also provides a canopy for outdoor enjoyment. 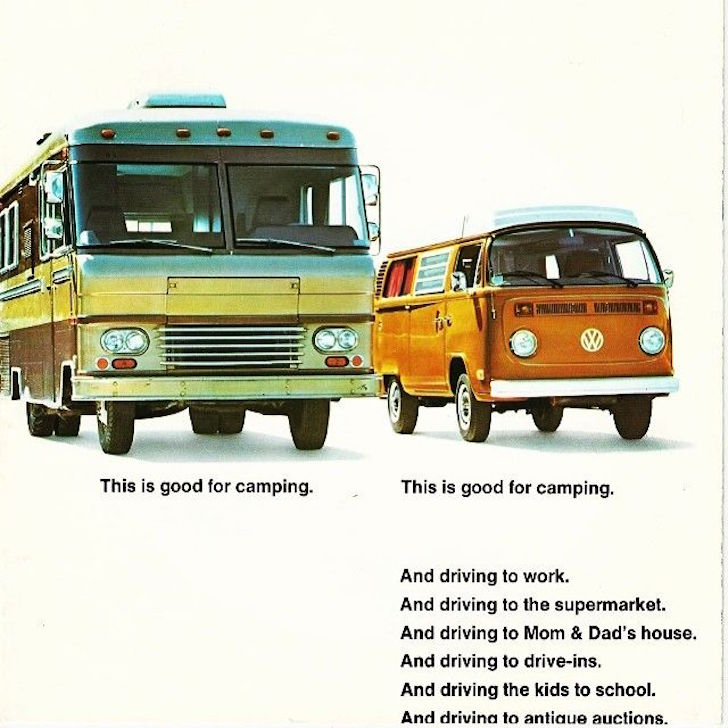 This descriptive promotion illustrates the added convenience of driving the smaller Volkswagen models rather than a traditional motorhome. It is fairly effective. 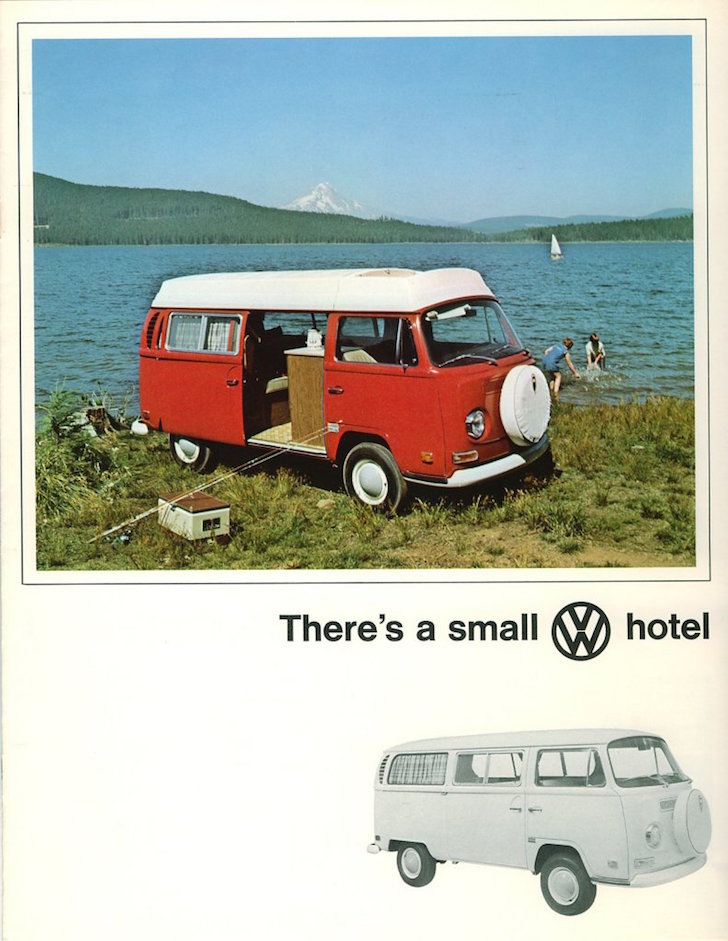 This ad demonstrates the adaptability of the camper van, as well as its maneuverability. Not every recreational vehicle is easily steered to the edge of the water.

Comparing a Camper to a Hotel Campaign

This advertisement does a great job of convincing potential buyers of the convenience of the camper van. With the features of a hotel and the mobility to go anywhere, why wouldn’t a frequent traveler buy one? 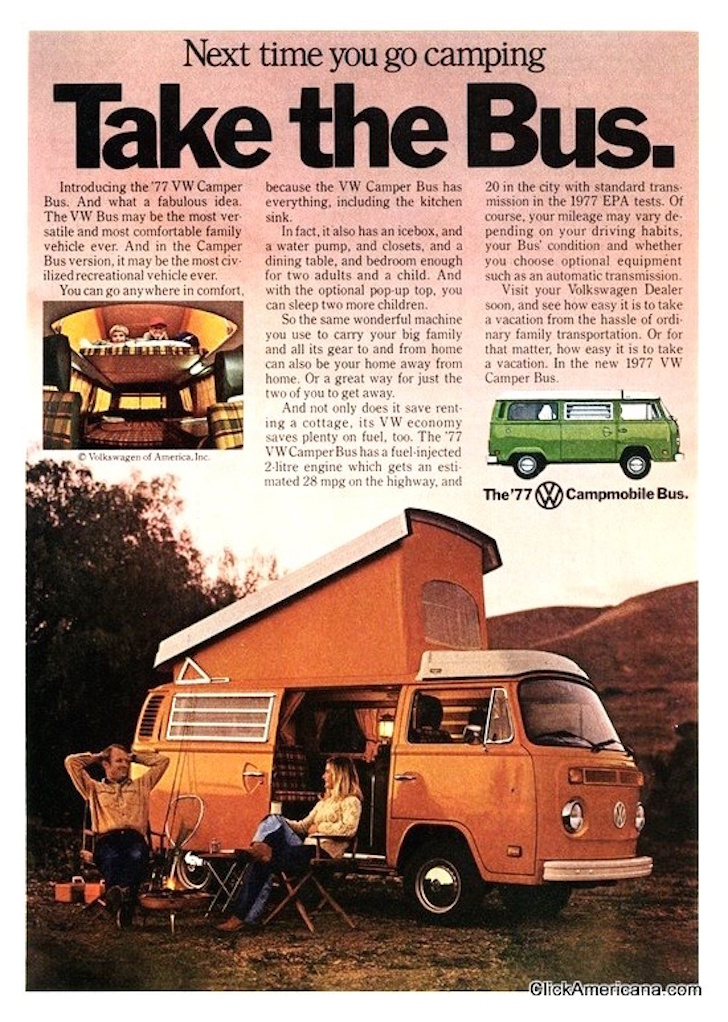 Along with the normal features, the 1977 bus provides a pop up tent on top for additional sleeping space. This ensures there is room for every family member to sleep comfortably within the vehicle.

Volkswagen: Getting the Most Out of its Promotional Plans 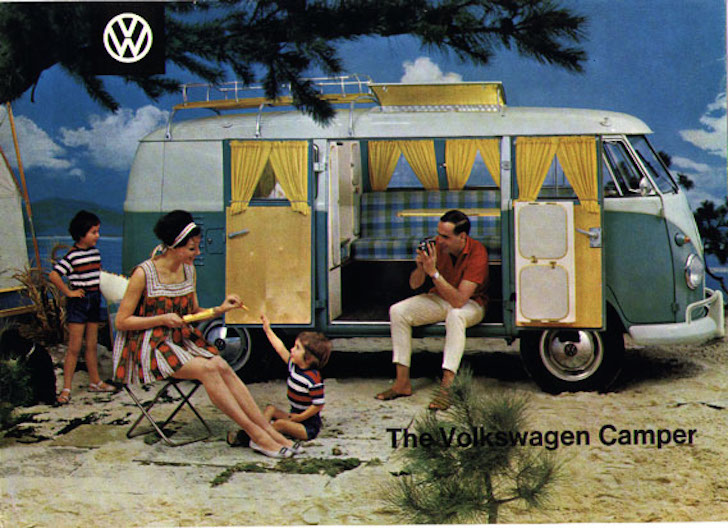 Why reinvent a great campaign? This advertisement revisited a previous camper van set updated with a new family. 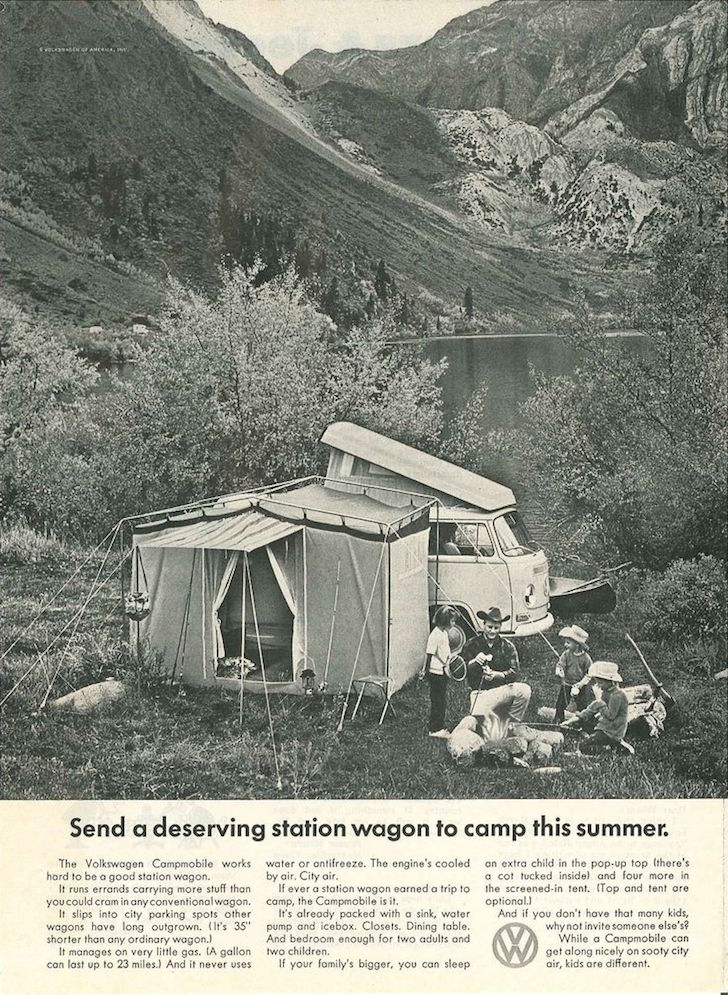 Along with describing the features that make this bus perfect for camping, as well as day to day use, the majestic scenery gives potential buyers a location to long for.

The Bus’s Day to Day Use Ad 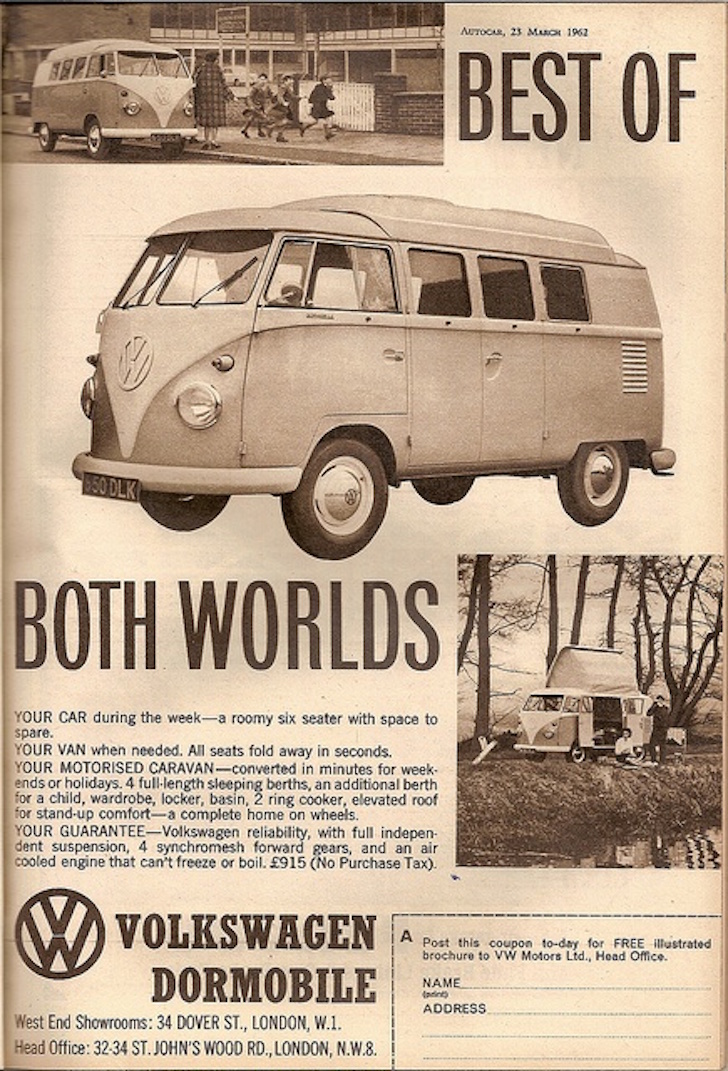 One of the biggest selling points for the Volkswagen camper bus was that is was not merely a camper. This vehicle was just as comfortable when used as a van to take the kids to school, pick up groceries, or drive to work, as it was when used for camping. 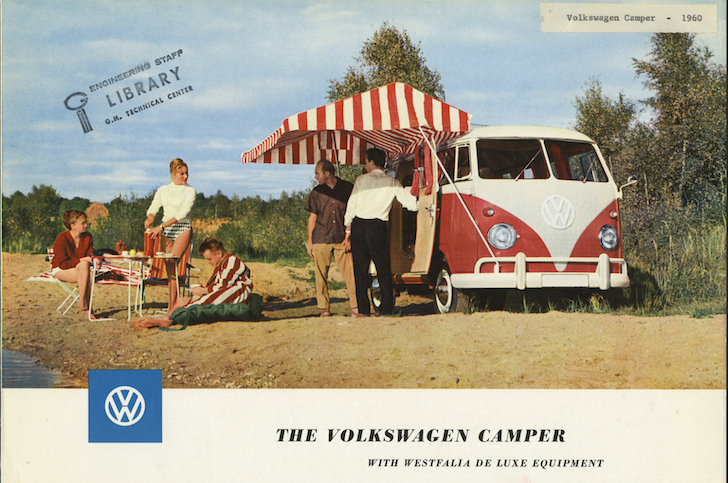 This, more modern looking van features an attached awning. That makes it perfect for outdoor cooking and entertaining. 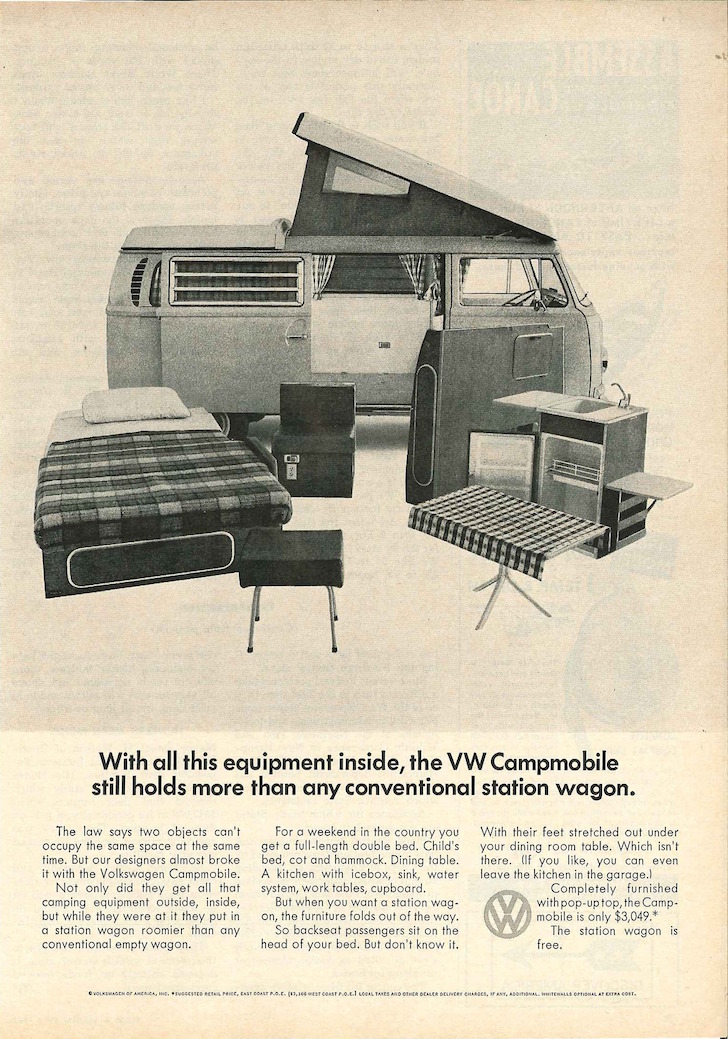 For those who always wondered what the inside of the Volkswagen camper van looked like, this promotion provides insight into the interior.

The Tug at Your Heart Advertisment 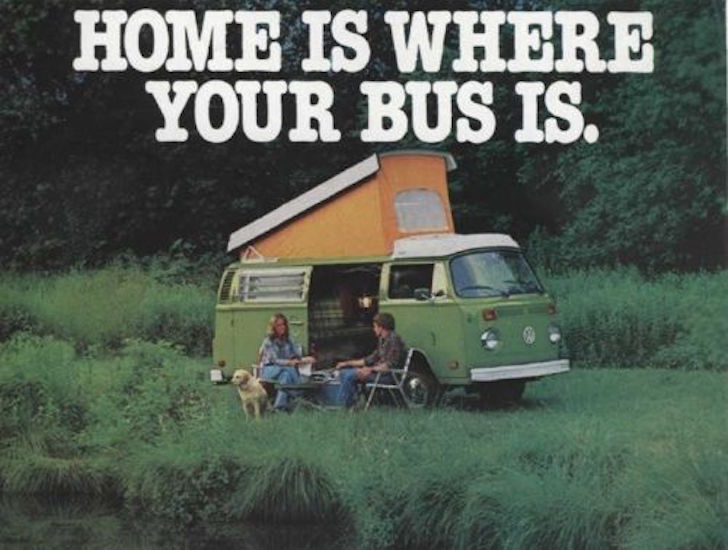 This promotion features a young couple relaxing with their dog far from the hustle and bustle of city-life. With the pop up and outdoor seating, there is more than enough room.

Although the modern Volkswagen camper van has made updates and improvements, it has remained surprisingly similar to its original design. With its more modest size, it gets better gas-mileage than traditional vans and motorhomes. It still manages to provide ample room for its occupants to sleep comfortably.

If these advertisements brought on a sense of nostalgia or historical interest, please share with your friends and family members who enjoy vintage ads and a look at the past.

As a first time owner renting your RV or travel trailer out on RVshare, it can be quite intimidating releasing…

Small Campers with Bathrooms Camping trailers are fantastic because they can be moved from one spot to another, meaning you’ll…

What’s an Off-Road Camping Trailer? We’ve all heard of camper trailers, but what exactly is an off-road camper? Well wouldn’t…

Tips for Remodeling an RV on a Budget

And Strategies to Create a Unique Space You did it! You’ve made the decision to remodel your RV. Congratulations! But…

How Much do RVs Weigh? Knowing your RV inside and out is always a good idea. This allows you to…