If you’ve ever seen a so called ‘silver bullet’ trailer traveling the freeway, you know what makes Airstream so appealing. Inspired by an airplane fuselage, the trailer that was created in the 1930s has been hitting the open road ever since. Today, the Airstream is an American icon — an instantly recognizable polished bubble that has customers lining up nearly 100 years after its debut.

The Airstream was created by Wally Byam, a Stanford graduate who worked his way through school and had a love of worldwide travel. In 1929 he built his first trailer as a pop up tent built off a Model T chassis. From here he expanded his design, making sure the trailer was easy to tow. In no time, the concept caught the eye of other travelers and Wally decided to start a business.

In 1931 Airstream opened its first tiny factory in Culver City, California and fewer than 50 competing companies in the U.S. Within 5 years there were 400 travel trailer competitors, and then a nationwide depression hit and forced nearly all the companies to close. Somehow Airstream remained afloat. During WWII Wally Byam closed the factory due to the lack of aluminum. He and his factory workers joined the war effort and helped create aircrafts. This experience only made Wally’s trailer better. At the end of the war, Wally created the first airplane constructed trailer. Things were starting to come together.

In the 1950s, Wally Byam began organizing Airstream caravans to South America and other exotic locations. The trips generated press, and eventually Vincent Price narrated a T.B. Miniseries all about the popular trailer’s adventures. Price said “A flying saucer landing could not have created more interest than that of an Airstream Caravan.” He was right.

In 1969 after Mr. Byam passed, the Airstream underwent its first redesign in 30 years. The result was a unit with rounder edges and a more luxurious interior. The ‘silver bullet’ shape became the trailers trade mark. The recession of the 1970’s hit Airstream hard and they moved the California plant and all operations to Ohio. 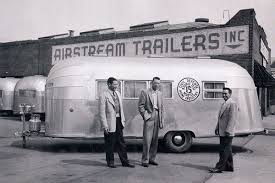 In 2015, the iconic trailer is still made in Jackson Center, Ohio by American’s who care about her quality. The factory produces 50 travel trailers every week, but they still cannot keep up with the growing international demand. Of course, this wasn’t true just a few years ago. The Great Recession hit Airstream along with the RV industry hard. Airstream was forced to sell to Indiana based, Thor Industries, one of the largest RV makers in the world. Today, shipments are up more than 8 percent and the RV industry is at a 40 year high.

Few people realize that this now massively popular trailer used be available as construction plans in the back of Popular Mechanics magazines. The trailer was originally built by individual owners who followed Wally’s detailed plans. Wally loved to experiment and even created a gold Airstream with the idea of adding other colors. After consideration, he ditched the idea and decided to stay with the highly polished exterior. Airstreams have also been used by NASA as containment trailers and the Air Force as research laboratories and communication centers. It seems that nearly everyone loves this classic trailer. 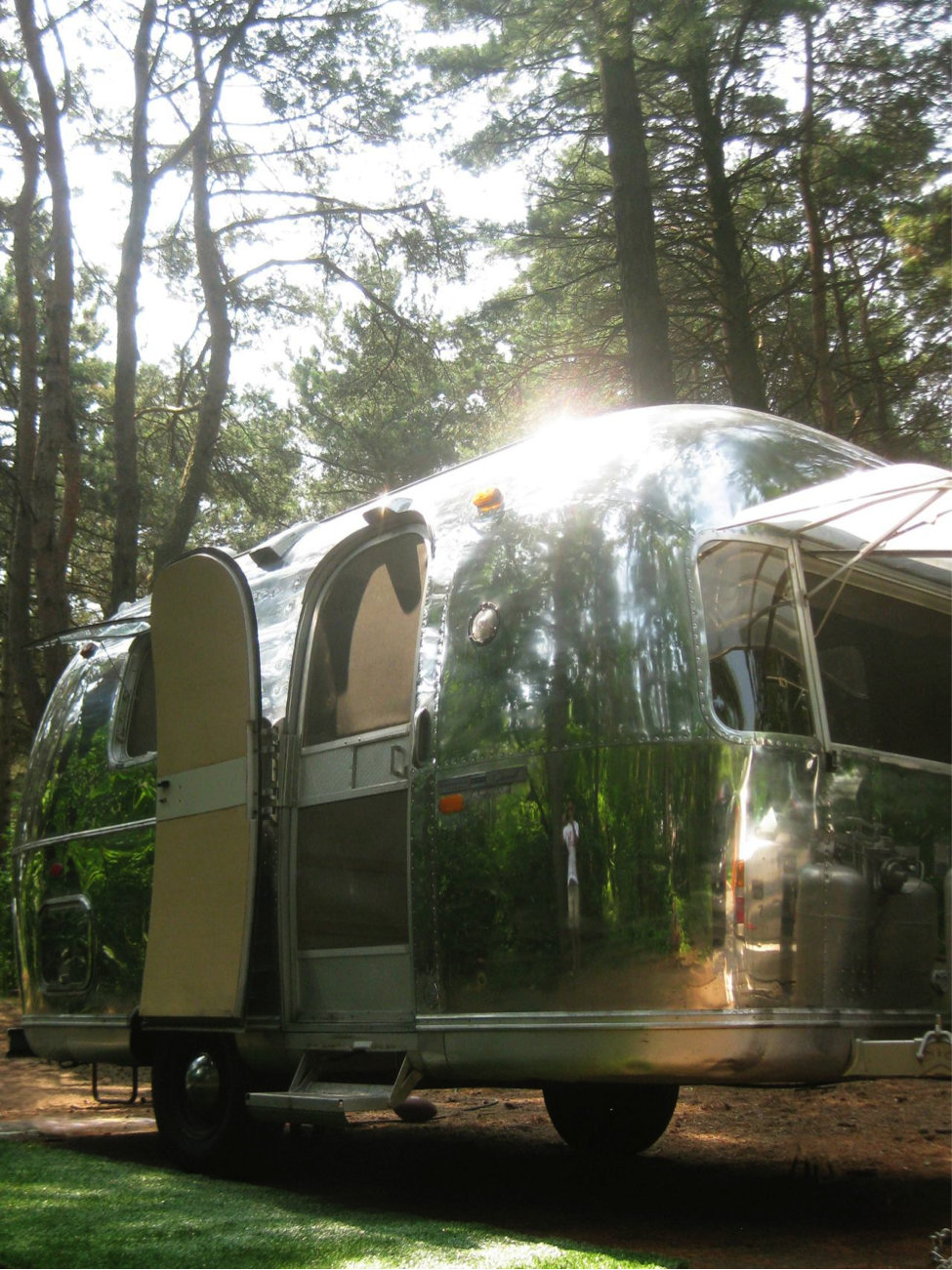 So what’s driving the current Airstream craze? A variety of factors are contributing to the Airstream story. These include the trailers appearance in movies, articles, Hollywood A lister’s collections and the growing Baby Boomer’s desire to travel. But Airstreams aren’t just purchased by retirees. Today, younger people in their 40s are downsizing and embracing mobile work opportunities and the Airstream is one of their top choices.

Airstreams today are at the high end of travel trailers. These units command between $45,000 and $150,000 new. If you can’t spend that much, eBay has pages of retro units available for refurbishing. To many, the Airstream represents a stunning piece of machinery with its hand riveted sides and its highly polished exterior. Author, Tara Cox, compares Airstream owners with those of the Harley-Davidson fans. The Airstream costs more, has less storage and requires more maintenance than many other travel trailers, but for its devoted fans there is nothing better.

Here are a few websites devoted the Airstream passion! 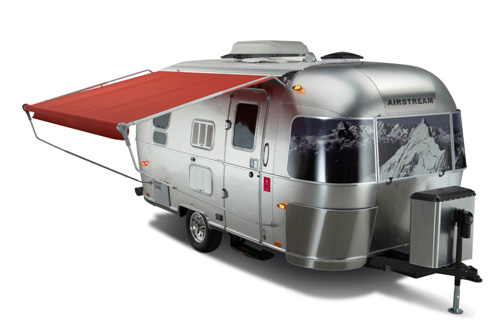 Yes, the Baby Boomer generation are still the main demographic for the Airstream company, but there is definitely a change happening. The trailer is beginning to reach out to younger buyers through social media and easier to tow designs. Recently, Airstream connected with the Columbus College of Art and Design to design and build a trailer targeted for people in their 20s and 30s who want to work from their unit. Airstream says that many of the design elements created in this project will be added to their future models.

Airstreams are becoming synonymous with off-grid living as many RVers are adding solar panels and other boondocking accessories. The trailer is also becoming a popular guest home for clever entrepreneurs eager to welcome guests to their backyard. Sites like GlampingHub and AirBNB are filled with opportunities to try the famous trailer out for a night.

Traveling overseas?  You can stay in a rooftop Airstream park in South Africa’s Grand Daddy Hotel. Each of the seven trailers were hoisted by crane to the top of the hotel and the views can’t be beat. In France, the BelRepayre Airstream and Retro Trailer Park offers Airstreams as rentals, rooms, and as a one of a kind lounge. 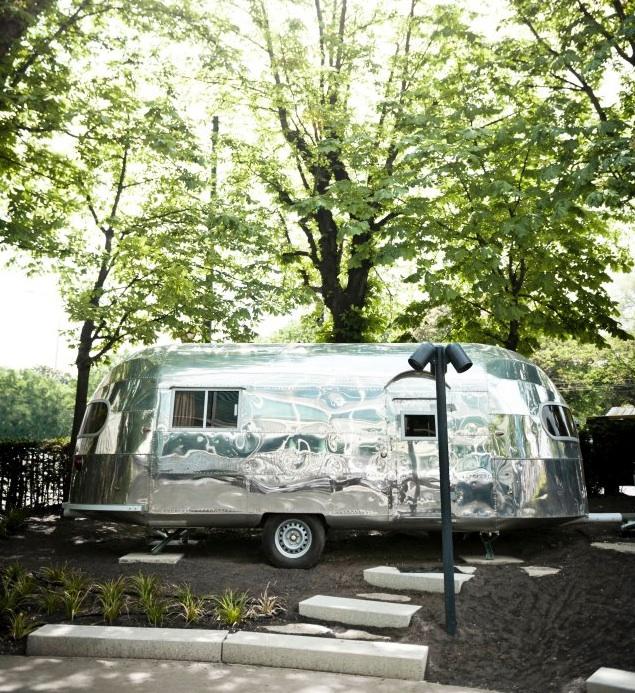 With all that Airstream information, are you interested in owning one? Why or why not? Leave your comments in the box below or share your experience with the travel trailer. If you like this article, learned something, or just love the photos, please share it with all your social media friends. Your support is always appreciated.

Airstreams have been around for a really long time, but…

This Retro Airstream Will Change Your Vacation Forever

If you’ve ever dreamed of visiting Australia, this is your…