Acupuncture — over the years, this controversial, “new age” treatment with ancient origins has become increasingly more popular and mainstream. The therapeutic technique, which applies needles to the specific points on the body’s meridians (channels through which the life force called Qi flows) to balance the energies, is thought to heal people.

For centuries it was attributed to the Chinese, but in 1991 the Alpine glacier “Ice Man”— who died around 3300 BCE — was discovered. His body exhibited tattoo marks consistent with acupuncture. That would mean the therapy existed almost 2000 years earlier than previously believed. Although immigrating Chinese doctors brought it to the U.S. in the 1800s it grew in popularity after President Nixon’s 1971 visit to China. 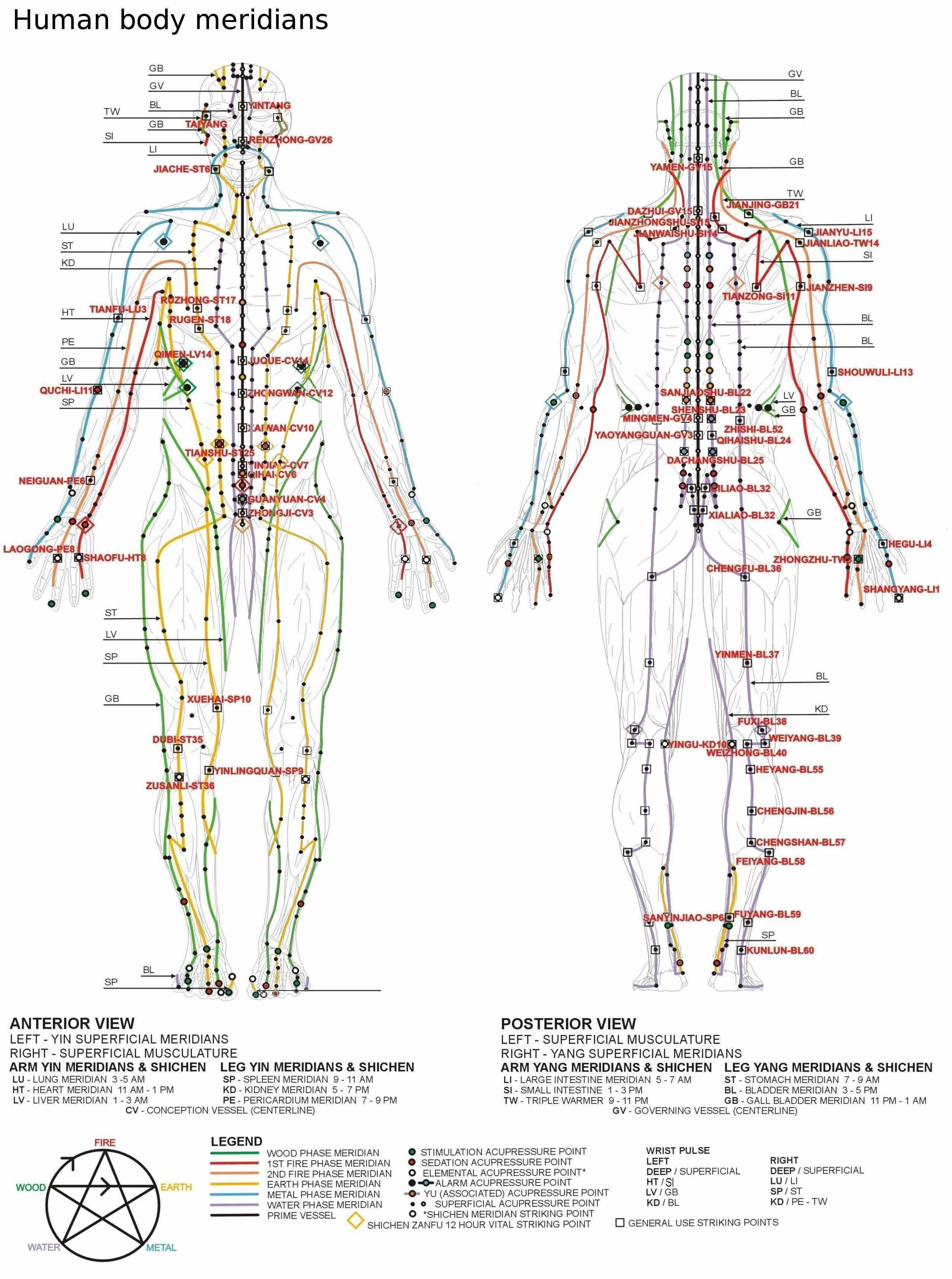 Airstream — the first Airstream was a teardrop-shaped trailer built in 1929. The company’s first factory was built in 1931 and over the decades, the trailers have increased in size and popularity. In fact, the Airstream is one of the most refurbished and renovated travel trailer there is. Over the years, fans have found a great number of uses for the recognizable “silver bullet.”

One of these fans is North Carolina acupuncturist, Christina Fish, who combined her passion for the practice and her love of the shiny trailer. Introducing, Silver Current Acupuncture.

Acupuncturist Christina Fish received her degree from the Jung Tao School of Chinese Medicine. Along with excellent needle technique, she learned Arvigo Techniques of Maya Abdominal Therapy, cupping, moxa, qua sha, and Tui Na. She has fine-tuned the art of customizing treatment strategies to benefit her patients.

After renting an Airstream for a weekend in 2008, Christina and her husband decided to buy one of their own. Fortunately, a friend of her mom had a completely gutted 1970, 27-foot trailer and wanted to get rid of it. 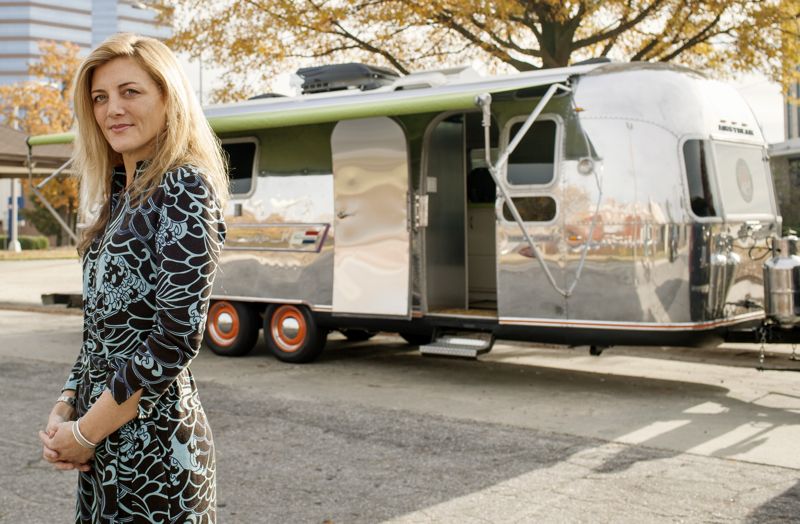 Many people have a fear of needles, and the first time they schedule a treatment they are typically apprehensive. By providing a soothing environment, Christina is able to demonstrate how relaxing the process really is and they are quickly put at ease. 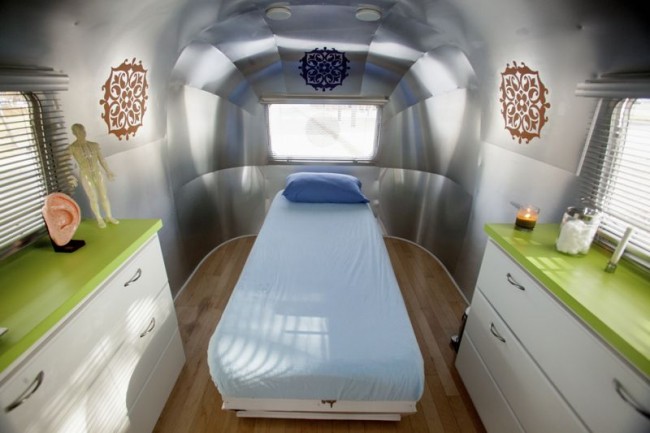 There are several benefits of making Silver Current your acupuncture clinic. Besides enjoying the unusual environment of the renovated Airstream, you receive treatment from a Board-certified practitioner with plenty of hands-on experience. These therapies relieve physical and emotional pain. They provide stress relief and lead to better, more restful sleep. Christina also customizes treatment strategies for sports-related aches, injuries, and pains.

Although she is willing to travel to treat groups of four to six, she has a particular place where she typically parks. She rises early and drives to downtown Durham, NC, near the Farmer’s Market pavilion, several yoga studios, and the local YMCA. This ideal location places her directly in the path of people who are interested in maintaining a healthy lifestyle. This makes attracting clients quite easy, as the Airstream is almost a moving advertisement for acupuncture. 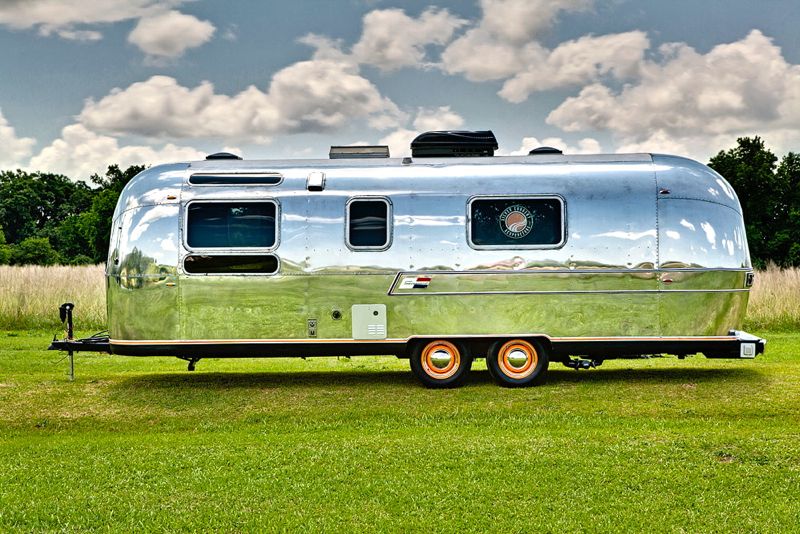 Working in the Airstream keeps the practice small and stress-free. Since there is only one room, there’s only one patient at a time and he or she receives individual attention. People arrive to be treated with needles or moxa and are impressed with the unique setting, which instantly puts them at ease. Although her client base is small (at around 15 to 20 per week), she prides herself on helping everyone with any condition that crosses her doorstep.

Receiving acupuncture from a qualified professional in an unusual location can make the experience a more comfortable one. If you are in the area and wish to schedule an appointment to have the Airstream come to you, call Christina at (919) 730-7886. 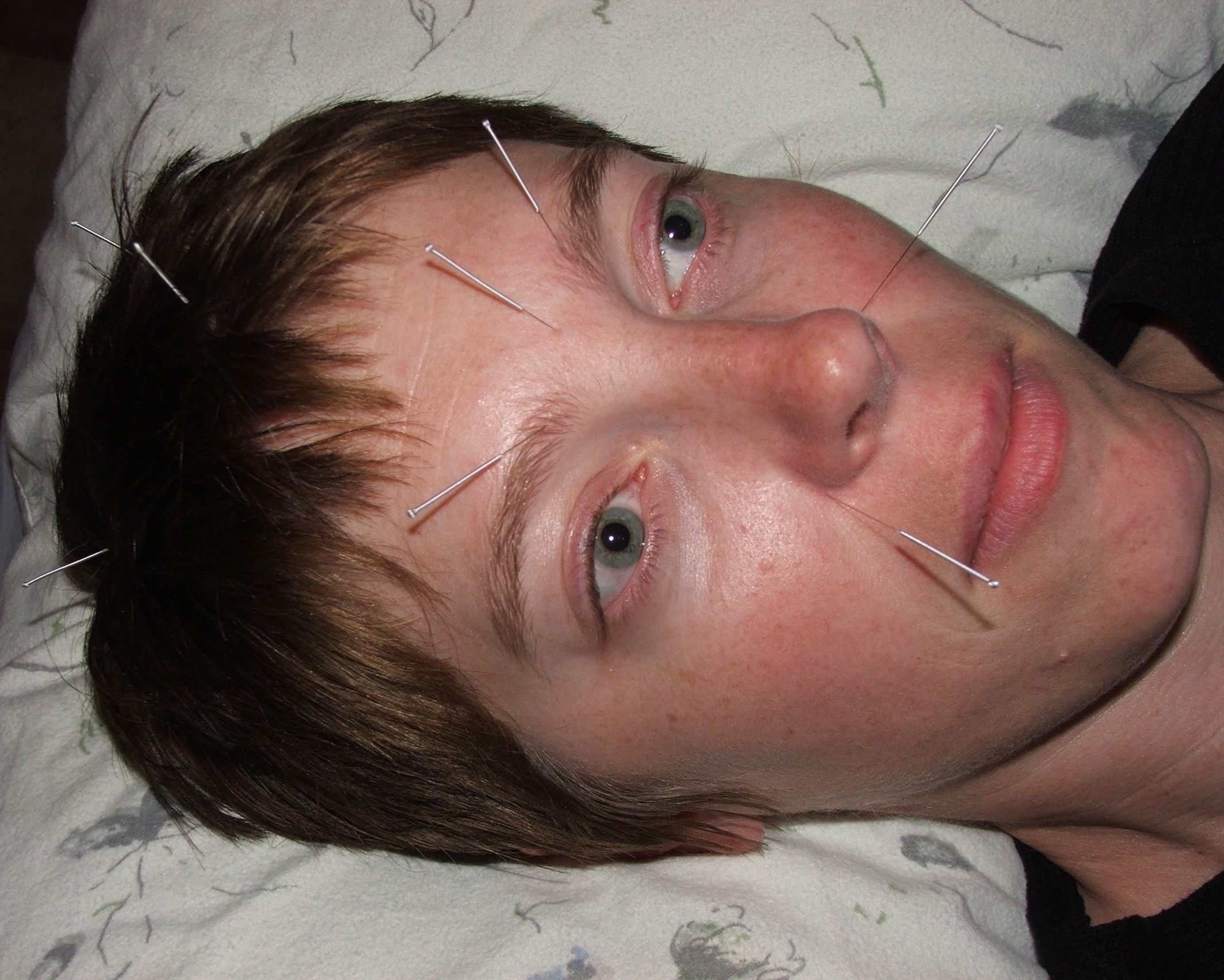 As Christina states, ““People are so busy that sometimes simply taking care of ourselves is seen as a luxury and not a necessity. If I can remove one hurdle by making the access to acupuncture a bit easier, I have accomplished what I set out to do.”

Please share with any friends and family members who are interested in less conventional treatment options, as well as those who love Airstreams. The easily recognized silver pill can be used for nearly anything!

How to Find the Perfect Campground

One of the most important parts of planning any RV camping trip is finding the perfect campground. Unfortunately, if you’ve…

One of our favorite things about traveling by van is that we get to bring our dogs along. We travel…

Whenever I open up Google Maps, I get excited because I know that I have a whole world to explore….

How to Stay Fit on the Road with the Adventure Allens

Before we dive into how to stay fit on the road, let’s define the word fitness. According to the American…

Colorado is such a great place to explore on an RV road trip! You can’t go wrong camping in a…

How To Transition To Living In A RV: AsoboLife

If you’re like us, you might have several strong reservations about moving out of your home and into an RV….